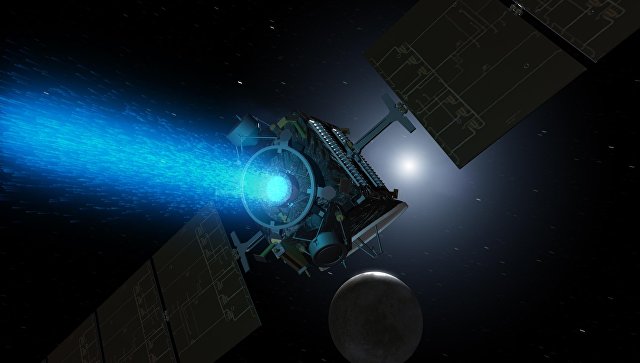 NASA management announced the next extension of the Dawn mission, within which the probe will change its orbit for the last time and will approach the surface of a dwarf planet for a distance of 200 kilometers, which will allow it to study the water reserves in its bowels, the NASA Jet Propulsion Laboratory reports.

“Dawn’s research team is now exploring the possibility of moving the probe to a new elliptical orbit, where it will fly just 200 kilometers from the surface of Ceres.” Earlier, this distance was 385 kilometers, “NASA officials said.

The American probe Dawn, which recently celebrated the decade, was the first spacecraft to study one heavenly body – Vesta, one of the largest asteroids, descended from its orbit a year later and headed for another – Ceres, the closest planet to the dwarf planet.

The first photographs of Ceres, received by the Dawn probe in March 2015 after its arrival to the dwarf planet, revealed two unusual structures that no one expected to see: the mysterious white spots in the Okatoria crater, which were traces of a thick brine, and the unusual Pyramid Mount of Ahune, over Ceres at four kilometers.

Subsequently, Dawn and his scientific team found out that Ahune is actually an ancient, already “extinct” cryovolcano, and white spots were the source of the temporary atmosphere of Ceres, consisting of water vapor. In addition, in other regions, scientists found deposits of “pure” ice, indicating that the surface of Ceres is continuously being updated, since these ice must have evaporated long ago into space.

These discoveries prompted NASA’s management and Dawn’s scientific team to use the remains of fuel in the probe tanks in order to change its orbit so that the “asteroids hunter” could approach the Ceres surface at about half the distance from today.

Similar approaches, as the planetologists explain, are necessary for the neutron detectors and gamma spectrometers of the probe to analyze the structure of the bowels of the dwarf planet and understand how much water it contains and where it lies.

In addition, in the spring of 2018 on Ceres there will come “summer” and it will be at the minimum distance from the Sun. At this time, as scientists expect, solar wind particles and light rays can melt some of these ice reserves and create a kind of temporary atmosphere, traces of which Dawn and a number of ground-based telescopes recorded in the past. The study of its composition will help planetary scientists to uncover the secrets of Ceres’ depths and understand how it could have formed.

According to the current plans of NASA, Dawn will be able to work in a new orbit, at least until the end of 2018. In principle, nothing further threatens the future life of the probe – Dawn and now, and after this maneuver will be in a stable orbit.