Dead astronauts can sow life on other planets 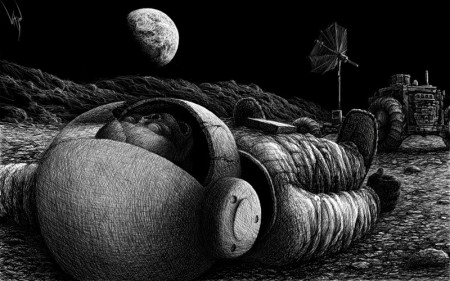 Several States and private companies are working on sending people to the moon, Mars and landing on asteroids. Such activity beyond low earth orbit greatly increases the risk for life and health of space travelers, and accidental death of an astronaut can sow life on other worlds.

Microbiologist Gary King of Louisiana state University in the U.S. believes that the human body is the perfect container for delivery of bacteria and a basic set of organic matter on a distant planet. Under certain circumstances, the germs inside the corpse be able of a long time to survive in the harsh space conditions, especially on such planets as Mars.

King specializiruetsya on the study of microorganisms that inhabit the most extreme places of our planet. Based on the data collected, he spent a number of scenarios in which an accident can contribute to the spread of life in the Solar system and maybe beyond.

We pulled out of permafrost microorganisms that remained alive in suspended animation about one million years. Such bacteria can easily transfer your flight to nearby planets, as well as some non-spore forming microbes, the scientist said.

As an example, the researcher cites the microorganism-extremophile species Deinococcus radiodurans, which is one of the most resistant to radiation of organisms on Earth and can survive almost without water.

However, in order to death gave new life requires certain conditions. First, if the death of the astronaut comes during the flight, the body must remain inside the spacecraft for entry into the planet’s atmosphere. And after the fall of the sealed enclosure of the apparatus needs to be broken so that microorganisms could spread beyond.

In addition, to preserve the viability of microbes they need periodic access to water molecules, which is possible at temperatures above the freezing point or freeze-drying conditions, when water changes from a solid to a gaseous state bypassing the liquid.

Germs survive better in the Solar system, as during a long flight to the nearby stars, e.g. Proxima Centauri, they will be exposed to significantly higher radiation exposure, said king. Cosmic rays in the interstellar medium will cause a change of DNA and RNA, which would hinder the further development of bacteria.

But king said that even in the case of the death of all microorganisms, a set of organic substances in the body of a dead astronaut can help the appearance of new beings on another planet. However, for this body must get to the surface world, where there are ideal conditions for the development of life, but is missing some key elements for its origin.