Dead star detected flying away from the galaxy 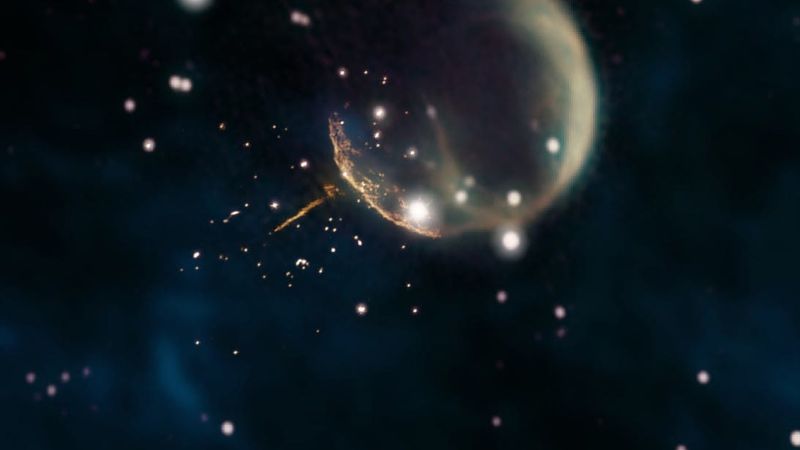 Astronomers have discovered a neutron star, which moves faster than 99% of its “colleagues.” Here, however, it is worth making a reservation: of those whose speeds were measured. Nevertheless, it is racing in outer space at a speed of four million (!) Kilometers per hour. It turns out that the object would cover the distance between the Earth and the Moon in six minutes.

PSR object J0002 + 6216 is located about 6500 light years from Earth in the constellation Cassiopeia. It belongs to gamma pulsars: in a second it also manages to turn 8.7 times around its axis. With each revolution of an amazing body, the beam of hard radiation emitted by an extinguished star is caught in the field of view of the Fermi gamma telescope. To an observer, this is similar to a periodically flashing beacon.

PSR J0002 + 6216 was opened in 2017 as part of the Einstein @ Home initiative. The participants of this project downloaded a special application on their computers. When the user does not work on his device, the software downloads and processes the data of the Fermi orbital gamma telescope, and sends the results to scientists. Thanks to the participants of the program, whose computers in total gave the project ten thousand years of computer time, 25 gamma pulsars were discovered.

Finding that such an object is hiding at this point in the sky, the specialists re-analyzed the observational data from the previous 10 years. This allowed them to determine the extraordinary speed of a celestial body.

Looking at the “found” using radio telescopes, astronomers found that it is only 53 light years from the center of the supernova remnant CTB 1. In addition, it turned out that PSR J0002 + 6216 has a “tail” of the substance, stretched just in the direction this residue.

The researchers believe that this “tail” is a shock wave, which was formed due to the rapid movement of the pulsar through the interstellar medium. He rakes gas in front of him like a bulldozer.

According to the astronomers hypothesis, the supernova CTB 1 exploded about 10 thousand years ago. A wave from the explosion caught up with the nearby PSR J0002 + 6216 and pushed it like a cannonball.

By mass, the neutron star is not inferior to the usual one, but is comparable in size to the Earth, that is, it is much less than an ordinary star. The heavy compact “projectile”, gaining speed, dropped it not as effectively as other products of the explosion, and eventually overtook the blast wave, going beyond the limits of the supernova remnant.

However, something in this chain of events remains unclear. A conventional supernova explosion would not have enough power to give a nearby neutron star such a speed (five times as high as the average pulsar!). It is so large that, sooner or later, the object will leave the galaxy.

Now scientists are working on explaining this fact. Perhaps the flash was asymmetric: then an extraordinarily large part of the energy could be directed towards PSR J0002 + 6216.

“Further study of this object will help us better understand how this explosion could disperse a neutron star to such a high speed,” concludes co-author of the work of the National Radio Astronomy Observatory of the United States.

The scientific work of the authors is accepted for publication in the Astrophysical Journal Letters.