“Death star” helped to see the future of the Solar system 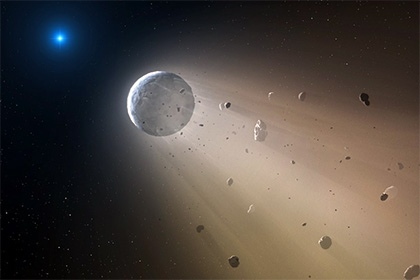 Astronomers announced the continued destruction of the white dwarf WD 1145 017 previously revolving around it a planetary system. According to scientists, the observation allows to predict the distant future of the Solar system, Earth and other celestial bodies. a Study on “the death star”.

Astronomers have discovered that since the discovery activity in the system WD 1145 017 (approximately seven months), the proportion of blocked fragments of the planet light from the star grew from a fraction of a percent to 10-11 percent. This demonstrates the continuing grinding of the debris of planets. Each of the structures up to four times larger than the WD 1145 017 is not monolithic and is formed of hard rocks and clouds of gas and dust.

Just in the new study, astronomers have compelling evidence around WD 1145 017 six fragments (one or more) of the planet. Indirect signs indicate that the number may reach 10-15. All the pieces revolve around WD 1145 017 at the same distance as the previously discovered (and later disintegrated into fragments) of a celestial body about 840 thousand kilometers (this is about twice the distance between the centers of Earth and moon).

In a previous study, researchers reported the discovery of the death star, defined as the distance between her and the shards of a destroyed planet, and estimated the number of orbiting WD 1145 017 of matter (equivalent to the volume contained in the Ceres — the largest object in the asteroid belt between the orbits of Mars and Jupiter). The scientists also calculated that the complete destruction of the fragments of the planet is about a million years (a short period of time due to the proximity of the fragments to WD 1145 017).

A white dwarf WD 1145 017 is at a distance of 570 light years from Earth in the constellation Virgo. Its age is estimated at 175 million years. Scientists believe that in a few billion years the Sun will become a red giant and engulf mercury, Venus, and probably Earth and Mars. Subsequently, the Orb will turn into a white dwarf and similar to WD 1145 017 will begin to destroy objects around him.