Deep under the ice: ancient Mars was given a chance for life 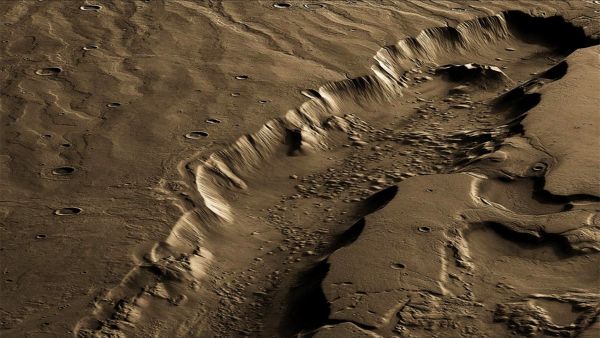 Life on ancient Mars could have existed under a layer of ice. Geothermal heat is capable of supporting it, American scientists have found.

The most favorable place to support life on ancient Mars was not its surface, but areas at a depth of several kilometers. This is the conclusion reached by scientists from the Rutgers University in the USA in an article published in the journal Science Advances.

They were also able to get closer to solving the so-called paradox of the weak young sun. The nearest star is a giant thermonuclear reactor that generates energy by converting hydrogen into helium. However, the power of this generator is not constant.

It is known that about four billion years ago the Sun emitted 30% less energy and the climate on the planet Mars should have been even colder than in our era.

However, in recent years, with the help of many missions sent to the planet, many geological signs have been discovered on Mars, including river beds and chemical compounds, indicating that on Mars 4.1-3.7 billion years ago (Noah’s geological period of the history of Mars) liquid water was abundant.

This discrepancy between geological data and climate models is called the Faint Young Sun Paradox.

“Even if greenhouse gases such as carbon dioxide and water vapor were introduced into computer simulations of the Martian atmosphere, climate models still cannot explain Mars that is warm and humid over time,” explained Luendra Oja, author of the publication. “My coauthors and I have suggested that the faint young Sun paradox could be resolved, at least in part, if Mars had geothermal heat in the past.”

On the solid terrestrial planets – Mars, Earth, Venus, and Mercury – heat-generating elements such as uranium, thorium, and potassium are heated by radioactive decay. In this case, liquid water can form at the lower boundary of the glaciers, even in the event of a lack of solar heat. Such examples are known on Earth – geothermal heat supports subglacial lakes in western Antarctica, Greenland and the Canadian Arctic.

Therefore, it is quite possible that such a melting could provide the presence of liquid water on ancient Mars.

To test the hypothesis, scientists decided to calculate whether the heat of the interior of Mars was enough to support liquid water 4 billion years ago.

Focusing on mountainous regions in the southern regions of the planet, where the most powerful glaciers are believed to have existed, scientists have modeled their thickness, behavior and evolution based on a variety of data, including from the Mars Odyssey orbiter probe, which has been studying the planet since 2001. There is a gamma-ray spectrometer on board, which made it possible to map the distribution of thorium and potassium in the thickness of Mars.

Scientists have calculated that the heat created by these isotopes in the mantle and crust of the planet was enough to melt the lower layers of glaciers, which created conditions suitable for the existence of life, independent of conditions on the planet’s surface.

Even if Mars was wet 4 billion years ago, the loss of the magnetic field, the thinning of the atmosphere and the subsequent drop in temperature may not have affected the lakes deep in the glaciers.

“At this depth, life could be sustained by hydrothermal activity and by the reaction between rocks and water,” explained Oja. “Therefore, the depths may represent the longest-lived habitable conditions on Mars.”

According to him, the data obtained may be important not only for understanding the evolution of Mars. The warmth of the interior could also play an important role in the origin of life on Earth billions of years ago. In addition, due to these mechanisms, life can exist on distant planets that are too far from their stars to support liquid water on their surface.