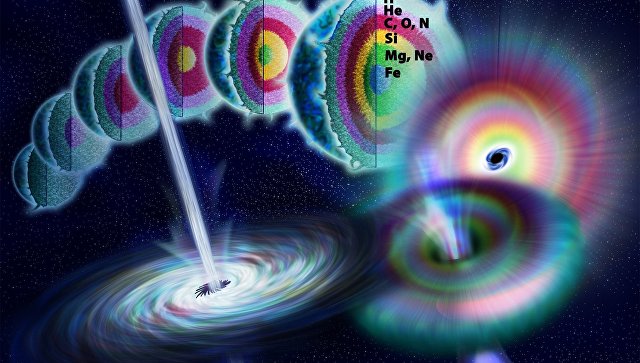 Scientists from the project to find traces of dark energy found an unusually bright ancient supernova in the constellation of Phoenix, whose outburst would eclipse three galaxies the size of the Milky Way, according to an article published in the journal MNRAS.

“The discovery of such a super-bright supernova in such a large galaxy contradicts our understanding of how galaxies and the universe evolved.On the other hand, given the small age of the galaxy, its stars have hardly produced a large number of heavy elements in a short time, That at that time such powerful explosions could occur even in large galaxies, including ours, “says Ryan Foley of the University of California in Santa Cruz, USA.

Supernovae flare up as a result of the gravitational collapse of massive stars, when the heavy nucleus of the star shrinks and creates a rarefaction wave that ejects the light matter of the outer layers of the light into the open space. As a result, a glowing gas nebula is formed, which continues to expand for some time after the explosion. Supernovae of the first type are formed as a result of the explosion of a double system from a white dwarf and a more massive star, and more common flares of the second type are caused by the explosion of giant stars.

Despite the fact that scientists constantly find more and more bright and powerful supernovae, astronomers have long believed that there is a certain limit of their brightness, which such outbreaks can not exceed because they will not need a large star that does not exist in reality .

Nevertheless, as noted by Foley, in recent years, astronomers have discovered dozens of super-bright supernovae, the so-called hypernovae, which “violate” this limit with a large margin in terms of brightness and power.

Foley and his colleagues managed to find one of the most ancient, vivid and far from us examples of such “infringers,” the supernova DES15E2mlf in the constellation of the Phoenix, which flared up about 10 billion years ago, at the time when the universe produced the largest number of bright and large stars.

Initially, according to Foley, the scientists considered it not a supernova supernova, but an ordinary supernova of the first type, flashed at a relatively small distance from the Earth, but further analysis showed that it was almost 10 times longer than originally assumed by astronomers.

For this reason, the brightness of this outbreak was really record – according to scientists’ estimates, the dying star allocated about the same amount of light, heat and other forms of radiation as the three analogs of our Galaxy.