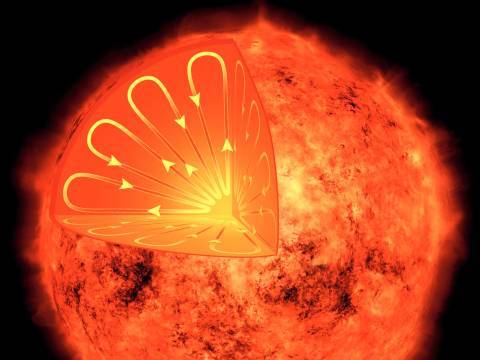 A few months ago from a neighboring star was discovered a small planet. Itself is Proxima Centauri belongs to the red dwarfs, it is ten times lighter than the Sun and a thousand times fainter than it. However, new work has revealed the unexpected similarity of the two stars: like the Sun, she noted regular cycles of activity, which are accompanied by fluctuations in the volume and spots.

Sunspots are the areas of the output of the plasma of low temperature, raised from the bowels of the star, the powerful magnetic field. The activity cycle is about 11 years, and in periods of low spots on the star can not be, and in the highs, their number may exceed a hundred, covering almost 1% of the surface of the Sun. According to data published in the journal Monthly Notices of the Royal Astronomical Society, similar cycles of activity experiencing and Proxima Centauri. However, on the star these variations are much more serious.

Using observations at different wavelengths, and the results of computer modeling, brad Wargelin (Brad Wargelin) and his colleagues from the US and Poland have shown that the cycle of activity of Proxima Centauri takes about seven years on high gaining a terrifying power: the spots cover at least 20% of the surface of the star. “If the planet Proxima b there is intelligent life, its residents regularly see on your star very dramatic change,” adds brad Wargelin.

According to scientists, such a bright cycles of activity in Proxima Centauri was a big surprise. This red dwarf is arranged is markedly different than our yellow Sun, which is a third outer layer of rapidly moving and especially the hot plasma, while the subsoil is noticeably colder and quieter, and even rotate slower. It is assumed that these differences are the source that triggers cyclic changes in the activity of the star.

On Proxima Centauri anything like that should not be: on a small star moving and able to provide convection (transfer of energy) of all the layers. “The very existence of the cycle in Proxima Centauri shows that we, in fact, poorly understood as are born of stellar magnetic fields and how they give rise to cyclic activity,” explains Wargelin.

Scientists did not consider the question of how the new circumstances may affect the possible habitability of the planet Proxima b. Theoretically, such rapid activity can do to sterilize its surface, so the planet being in the right “habitable zone” may be completely lifeless – like our Moon.