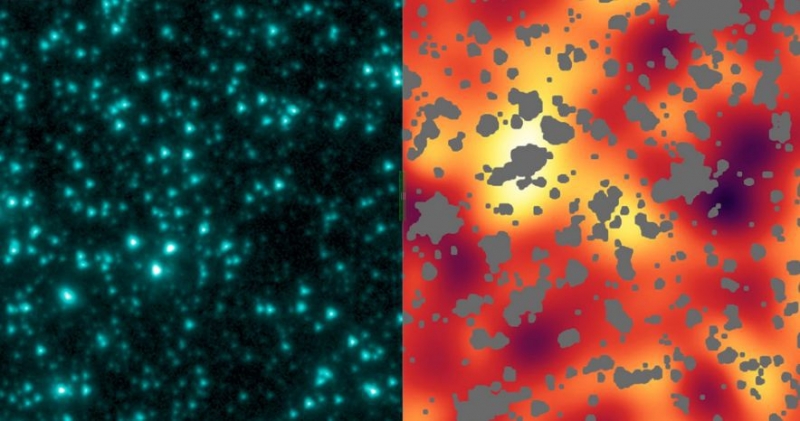 Dark matter is a mysterious substance constituting the greater part of the material Universe and consisting, as now assume, of massive particles with unusual properties.

An interesting alternative to this theory is a theory according to which dark matter consists of black holes, formed within the first second after the Big Bang. In a new study by an astrophysicist at the space flight Center of NASA Goddard, USA, Alexander Kashlinsky shows that this interpretation is in good agreement with our knowledge of the cosmic infrared and x-ray background radiation and may explain the unexpectedly large masses of the merging black holes, the fact that the merger which was discovered last year.

In 2005, a team of NASA astronomers using the space telescope “Spitzer” recorded background infrared radiation in one part of the sky, demonstrating heterogeneity. The researchers then concluded that this light relates to the sources of the early Universe that existed more than 13 billion years ago.

In 2013, another study astronomers have discovered using x-ray Observatory NASA “Chandra” is similar to background radiation, but in the x-ray region of the spectrum. The first stars radiate mostly in the optical and UV ranges, while the expansion of the Universe the light emitted by them, “stretched”, going into the infrared region of the spectrum, so the first stars can’t be responsible for the x-ray background, concluded the authors of the study. The only known candidates for the role of sources, emitting in a wide wavelength range, remained black holes.

In their study, Kashlinsky suggests that dark matter is actually made up of black holes, such as those that were recently registered by using the LIGO Observatory. According to his theory in such a hot early Universe the dark matter has given “germ” where there is condensation of gas with formation of stars, emitting light in the optical and UV ranges. In addition, condensable gas falling into black holes and began to glow in x-rays – which explains the emergence of the observed x-ray background. Such a scenario explains the observed correspondence between the paintings of inhomogeneities in the maps of x-ray and IR background.

Over billions of years, according to Kashlinsky, some of the black holes born in the early Universe, formed pairs and were merged into a single black hole, emitting gravitational waves, similar to those recorded at the beginning of the year, the LIGO Observatory.

The work was published in the journal Astrophysical Journal Letters.