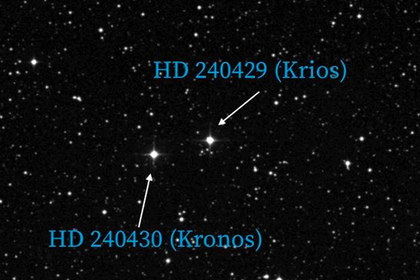 A team of astronomers from Princeton University discovered the star HD 240430, called Kronos. Analysis of the chemical composition of the object revealed traces of absorption by the star of terrestrial planets. This is reported in a press release on the site Phys.org.

HD 240430 is a part of a double star along with another object – HD 240429, or Cryos. This system is 350 light years away from the Earth. The age of the stars is about four billion years, they belong to the same type as the Sun.

Researchers have discovered in Kronos an unusually high level of rock-forming minerals, including magnesium, aluminum, silicon, iron, chromium and yttrium. The level of volatile compounds (oxygen and nitrogen) was relatively low. Thus, HD 240430 revealed those substances that are capable of solidifying at high temperatures (above 1200 Kelvin). Typically, these substances are part of the terrestrial planets, capable of being near the parent star, in contrast to gas giants such as Jupiter or Saturn.

The researchers calculated that to obtain the observed amount of rock-forming minerals, Kronos had to absorb about 15 rocky planets.