Discovered a planet whose atmosphere is capable of evaporating iron 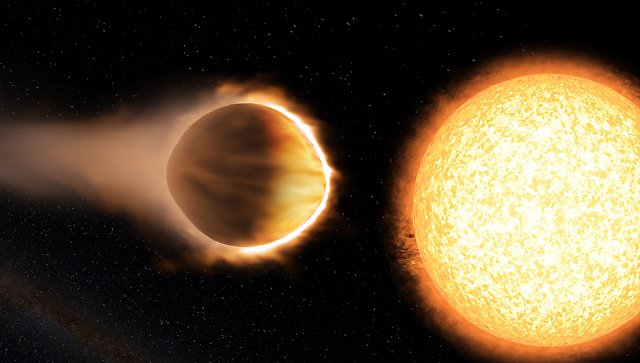 Astronomers first studied the properties of the stratosphere of one of the giant exoplanets and found that it was heated to such temperatures that it could evaporate iron and other metals, according to an article published in the journal Nature.

“When we first set the Hubble on WASP-121b, we saw the radiance of water molecules, which indicated the presence of a distinct stratosphere on this” hot jupiter. “Our theoretical calculations have long indicated that some planets may have very hot Stratosphere, strongly influencing the chemistry and physics of the entire atmosphere, “says Tom Evans of the University of Exeter in the United Kingdom.

Over the past ten years, astronomers have discovered thousands of planets outside the solar system, some of which turned out to be similar in size to Earth, and others to smaller or larger copies of Jupiter. Now, planetologists are actively working to study their atmosphere to assess whether life can exist on them, and to disclose the history of formation.

Great progress in this direction was achieved in the study of “hot Jupiters” – the largest and most convenient for studying the planets outside the solar system. Their hot atmosphere turned out to be similar in composition to the gas shells of Jupiter and Saturn, mainly consisting of hydrogen, helium and hydrocarbons, and in their skies astronomers discovered exotic glass and lead clouds and rains from precious stones.
According to Evans, scientists have long suspected that many “hot Jupiters”, having record high surface and atmosphere temperatures, can have an even hotter stratosphere, the temperature of which, like its “namesake” on Earth, increases with distance from the surface Gas giant.

The telescopes existing today are too small to directly observe the atmosphere of such planets, and therefore scientists have to look for their tracks in the glow of stars around which “hot Jupiters” revolve, relying on the properties of the terrestrial stratosphere and computer models of red-hot gas giants.

The problem is that scientists did not know what substances or molecules can serve as an analogue of ozone, the main culprit for warming up the stratosphere on Earth. Ozone molecules, as scientists explain, absorb ultraviolet radiation and convert it into heat, which makes the stratosphere hot “from above,” where there are more such rays than “bottom”, where they fall much less often.

Under the iron clouds

Evans and his colleagues tried to find such molecules, analyzing the spectrum of the hottest exoplanets with the help of the “Hubble”. Observing the newly discovered planet WASP-121b, the “hot Jupiter” in the constellation of Korma, the scientists found several extremely unusual lines in their spectrum, indicating the presence of highly heated water vapor and a number of other substances capable of heating water to such high temperatures.

Trying to understand what substances are contained in the atmosphere of WASP-121b, scientists created a computer model of this “hot Jupiter”. Using this virtual planet, astronomers added various substances to its atmosphere and watched how its spectrum changes as the set and concentration of these compounds change.

This technique helped them to prove that the upper atmosphere of the WASP-121b is really similar to the stratosphere, the role of ozone is played by two substances – titanium oxide and vanadium oxide, whose nanoparticles and molecules absorb ultraviolet even more than ozone.

Thanks to these compounds, the upper layer of the WASP-121b stratosphere is about 1100-1500 degrees Kelvin hotter than its lower part, and temperatures in it reach a record 2700 degrees Kelvin. This means that the iron that got into this part of the WASP-121b atmosphere would not only start to melt, but it would also be ready to “boil” and evaporate.

This discovery, according to Evans and his colleagues, confirms that there are two classes of “hot Jupiters”, whether or not possessing the stratosphere. Further study of WASP-121b and the discovery of other planets of this kind, in the opinion of planetologists, will help us understand what exactly distinguishes them and how such “hellish” worlds are formed.