Discovered anomaly in the expansion of the Universe 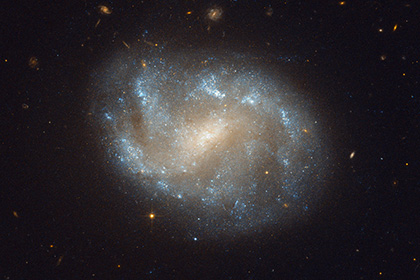 An international group of researchers working in the astronomical service of The Baryon Oscillation Spectroscopic Survey discovered a paradox, which can serve as evidence of the anomalous properties of dark energy. This indicates a discrepancy in terms of speed of expansion of the Universe, obtained by different methods. Preprint of article published in the repository bioRxiv.

According to the findings, the universe is expanding at a speed of 67 kilometers per second per megaparsec, with a margin of error of 1.5 percent. These results correspond to the estimates of the Planck mission, which studied the cosmic microwave background radiation (CMB) is ancient light, which emerged after 380 thousand years after the Big Bang. However, they contradict the findings of a team of astrophysicists under the leadership of Adam Riess, who calculated the Hubble constant on the basis of definition of distances up to 300 type Ia supernovas and thousands of Cepheids. Because the brightness is always the same, they serve as “standard candles” in other words, there is an inverse relationship between brightness and distance from Earth.

In the new study, the researchers examined the clustering of 1.2 million galaxies. In the early stages of development of the Universe there were waves, compressing the substance in clumps and leaving gaps of empty space between them. The distance between clusters has allowed astrophysicists to measure the rate of expansion of the Universe. Thus were obtained the evidence that the discrepancy between the results obtained using different methods are not a coincidence.

The researchers suggest that the discrepancy can be explained by the presence of particles of an unknown type, such as a neutrino of a new format, which influenced the rate of expansion of the early Universe. Another possible reason is that dark energy changes over time and gives it more acceleration than predicted. In addition, some researchers have questioned the accuracy of the method using standard candles. To test the reality of differences, astrophysics propose instead to use Cepheids variable stars in the RR Lyrae or red giants.

Since its birth, the universe is constantly expanding with acceleration. The reason for this process scientists call dark energy, which permeates space and causes it to swell all the faster.