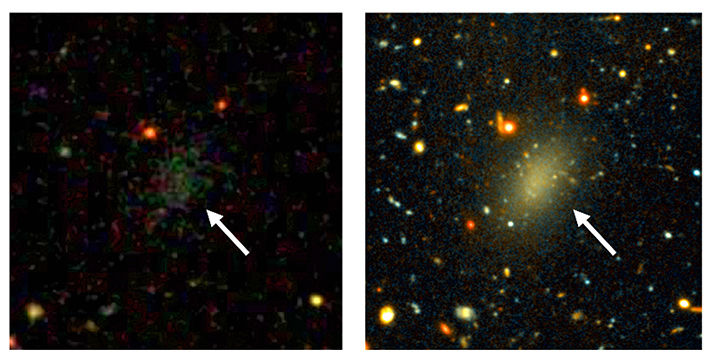 It turns out that in the depths of the Universe, our galaxy, the milky Way galaxy, a galaxy, a twin, to be exact, not twin, and the antipode. This galaxy, Dragonfly 44, has a mass comparable to the mass of the milky Way, however, the number of stars and other structures in it hundreds of times less than the number of foreign space objects in our galaxy. Galaxy Dragonfly 44 is very dim, because it is 99.99 percent consists of invisible dark matter.

Moreover, the galaxy Dragonfly 44 is not the only one of its kind in the Universe. The group of Peter van Dokkum conducted a study of the cluster of coma Berenices (Coma cluster), located at a distance of 320 million light years from Earth. In the depths of this cluster, scientists have detected 47 faint spots, galaxies, dimensions of about 100 thousand light years, which is comparable to the size of the milky Way. However, the number of stars in these galaxies are so small that they glow no stronger than a regular dwarf galaxy.

Scientists have two explanations for the existence of such phenomena. The first explanation is that these galaxies are connected and held as a single unit large clusters of dark matter, a mysterious substance whose nature is still a mystery to scientists and which accounts for about 85 percent of the total amount of matter in the Universe. The second explanation is that these space objects are unstable and they gradually break apart the strong gravitational forces of the cluster of coma Berenices.

In order to make a choice in favor of the first or second assumptions, scientists have studied the largest of dark galaxies, galaxy Dragonfly 44, by means of a spectrograph installed on the 10-meter Keck II telescope, located on top of mount Mauna Kea in Hawaii. The data allowed scientists to determine the velocity of stars in the galaxy and calculate its approximate weight.

It turned out that the average speed of stars in the depths of the galaxy Dragonfly 44 is 47 kilometers per second, which corresponds to the mass of the galaxy, a trillion times greater than the mass of the Sun, 2 tredecillion kilogram (two with 42 zeros). However, given the density of stars and normal matter in the galaxy, 99.99 per cent of its weight should fall in the mass of dark matter. This figure is a record for all known dark galaxies, and the previous record holder was a galaxy in the Virgo cluster, at a fraction of the dark matter mass which had a 99.96 percent.

To date, astronomers have not even a theory that can explain the formation and existence of such galaxies, which belong to the class of Diffuse Ultra Galaxie (UDG). It is very difficult to argue with the data obtained by direct observations. However, these data are completely contrary to everything we know about the processes of galaxy formation, ” says Jeha Marla (Marla Geha), a scientist from Yale University, is the fact that such objects are quite rare in the Universe, indicates that they are formed by some special environmental conditions, arising under the influence of the more massive objects such as clusters of galaxies. Otherwise we have to reconsider everything we know about the processes of galaxy formation.