Discovered on the “Kepler” planet that might have life 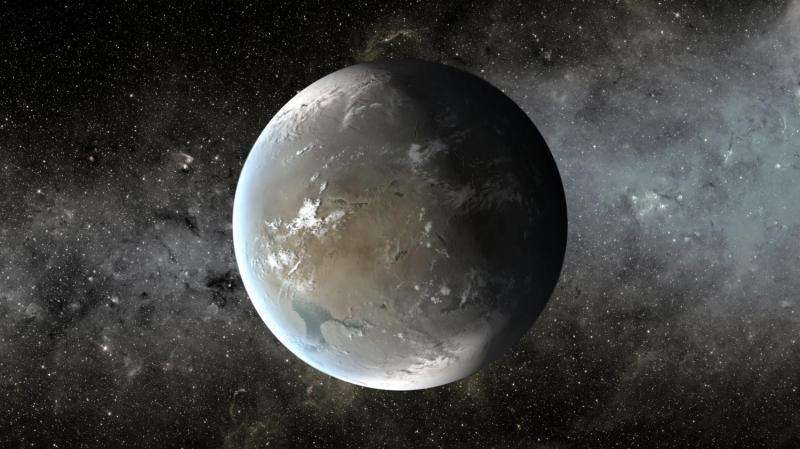 “We found there’s a lot of atmospheric constituents, which provide the heat sufficient for the existence of liquid water on the surface,” says Amava shields, lead author and a postdoc in astronomy and astrophysics National science Foundation and the University of California. Is a serious candidate habitable planets”.

On Earth carbon dioxide is 0.04% of the atmosphere. Because Kepler-62f is much farther from its star than earth is from the Sun, on this planet should be a lot more carbon dioxide that it was warm enough to support liquid water on the surface and do not freeze.

University of California researchers combined a model of the orbit and climate, to show that Kepler-62f is able to support life. The planet, located 1200 light years from Earth in the direction of the constellation Lyra, approximately 40% more Land. At this size of Kepler-62f is within the range of planets that are very likely to be solid and may have oceans, says shields.

The mission of “Kepler” NASA has discovered a planetary system, including Kepler-62f, in 2013 and identified as external 62f of the five planets orbiting a star that is smaller and cooler than the Sun. But this mission did not give information about the composition of Kepler-62f, its atmosphere or the shape of the orbit.

The team conducted a computer simulation taking into account the fact that Kepler-62f may have the atmosphere, the thickness of which varies from earth to earth 12. Different concentrations of carbon dioxide in the atmosphere fluctuate from what on Earth to exceed this figure by 2,500 times.

“But if the planet has no mechanism for generating large amounts of carbon dioxide in the atmosphere to keep the temperature warm, and in the presence of the earth there is only the amount of carbon dioxide, certain configurations of the orbit can allow the surface temperature of Kepler-62f constantly remain above freezing for most of the year,” she says. — And this may contribute to melting glaciers, which are formed at a different time of a planet in orbit”.

Scientists had calculated a possible form of the orbital path of the planet, using an existing computer model called HNBody, and also used the existing global climate models to simulate the climate of exoplanets.

Shields said that the same method can be applied to understand whether a planet is located much closer to the Earth, to be inhabited, provided that it will be solid. (Gas planets have a composition quite different).

“This will help us to understand how great is the probability that the planet will be habitable, based on a wide range of factors on which we do not yet have data from telescopes, — said the scientist. And this will allow us to form a list of priority targets for next generation telescopes”.

Scientists do not know whether there is life on exoplanets in principle, but shields with optimism nourishes the hope of finding life in the Universe. Over 2,300 exoplanets have already been confirmed, a few thousand planets can be established, but only a few dozen at the moment are considered to be “potentially habitable”.