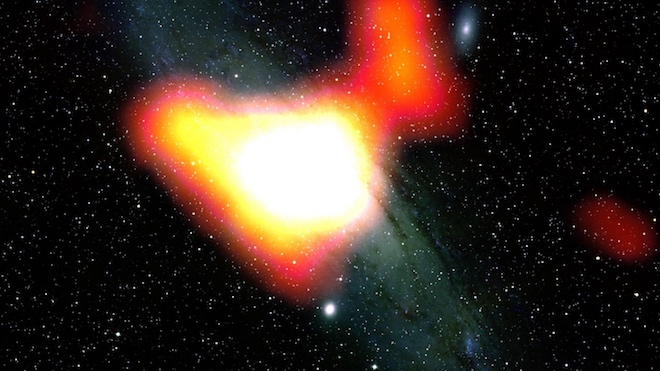 Gamma rays are high-energy form of light that occurs when the most powerful events in the Universe. They are common in galaxies like ours and are produced by cosmic rays during their interactions with clouds of interstellar gas and starlight. Cosmic rays, particles moving at almost the speed of light.

Recent data from the “Fermi” show the gamma rays are concentrated exclusively in the Central area of the Andromeda galaxy, or M31. According to scientists, this radiation distribution can be explained by the presence of several uncertain sources. One of them may be dark matter — unknown matter that makes up most of the Universe.

“We assume that dark matter accumulates in the depths of the milky Way and other galaxies, so to find such a compact signal is extremely exciting — said the lead author of Pierrick Martin of the research Institute in astrophysics and planetology in Toulouse (France). — Probably the M31 will be the key to understanding what it means for both galaxies.”

Another possible source of this radiation could be the high concentration of pulsars in the centre of M31. These rotating neutron stars weigh as two of our Sun and are among the most dense objects in the Universe. Teaspoon of the substance of a neutron star on Earth would weigh a billion tons. Some pulsars emit most of their energy in the form of gamma rays. But since M31 is removed from us at 2.5 million light years, it is difficult to find a separate pulsars from a distance, to check this out.

Now, when the “Fermi” found such gamma-traces in M31 and the milky Way, scientists can use this information to research both galaxies. For example, M31 allows you to see how cosmic rays behave in conditions different from the conditions of our Galaxy. In addition, in Andromeda in visible areas, which in the milky Way obscured by the radiation from the disk. Therefore, the data about these twins can complement each other.

“Andromeda is so similar to our own milky Way that can really help us to know more about it, says co-author Regina Caputo from space flight Center Goddard. — It’s like living in a world where you have no mirrors, but got a twin, looking at which you can judge its physical properties.”

Although to determine the source of the gamma rays, it is still a lot of research discovery provides an exciting starting point for the disclosure of galactic secrets and, possibly, dark matter.