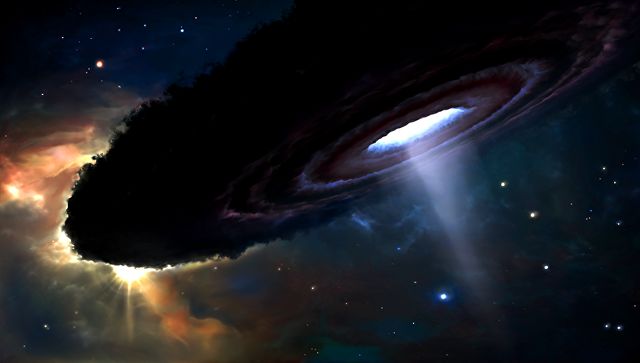 The list of mysterious stars fading for some inexplicable reason, added to FO luminary in the constellation of Aquarius. Both components of this double star has faded seven times in recent years.

When this star came out from behind the Sun and we were able to resume observations, we were shocked that it was seven times dimmer than in past epochs of observations. Fading stars is a sign that the white dwarf ceased to steal matter from its neighbour, and why it happened is unclear. And although the FO of Aquarius began to re-gain brightness, the process took too much time, explains Colin Littlefield (Littlefield Colin) from the University of Notre Dame (USA).

The star FO the Aquarius belongs to the rare type of binary stars, the so-called polar double stars. As a rule, they represent a pair of large and small white dwarfs to normal stars rotating very close to each other. Thanks to this part of the outer layers of a normal star is in the gravitational sphere of influence of a white dwarf, and he pulls on her cloth.

This process increases the brightness of the system and causes it to oscillate within certain limits inasmuch as the white dwarf digesting the stolen hydrogen and burns it on the surface. Traces of this process can easily be seen in a powerful x-ray beams, which gives rise to hydrogen incident on the surface of a star vampire.

FO of Aquarius is one of the closest to the Earth stars of this type – it is removed from us by only 500 light years. In 2014, when the Kepler telescope began work in the mission K2, he studied that part of the constellation of Aquarius, where there is FO. This allowed scientists for the first time to accurately measure the luminosity and to know the other astrophysical parameters.

Two years later, when FO Aquarius looked over the Sun, the researchers decided to re-check the observation results obtained by Kepler. At that time, they had a surprise: it turned out that the brightness of the stars has fallen by more than two magnitudes for this period of time, down seven times. Nothing like the astronomers haven’t seen yet, watching the double luminaries.

Has changed not only the brightness, but also the behavior FO the Aquarius – the star started blinking, increasing or decreasing its luminosity by 50% every 22 and 11 minutes, switching between these cycles every two hours. Scientists believe that these fluctuations in brightness are associated with how fast the white dwarf is orbiting a normal star.

Why fell the brightness of the sun, astronomers still do not know. They can’t explain why white dwarf has temporarily suspended his lunch and returned to their usual diet with a very long delay. Littlefield and his colleagues believe that the reason could be a major stain on the surface of a conventional half FO of Aquarius, which randomly got to the point where the dwarf steals matter.

A strong magnetic field generated by the spot has slowed the flow of hydrogen, which lowered the brightness of the system. On the other hand, this does not explain the slow rate of recovery of brightness of the star, so it falls into the category of enigmatic luminaries like star KIC 8462852 aliens and other objects whose behavior is modern science can not yet understand.