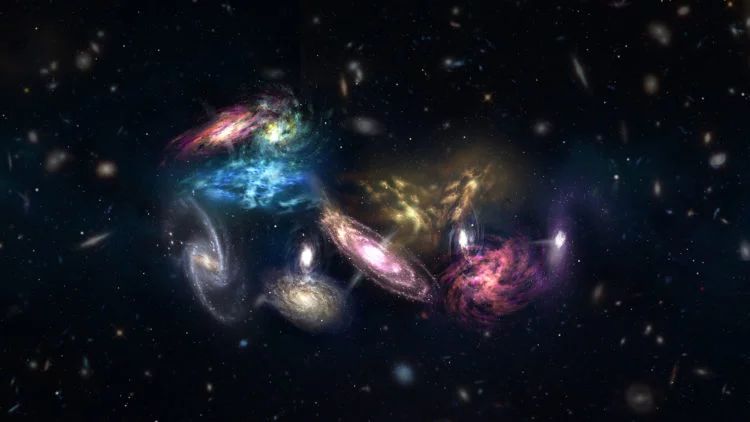 Just as a ripple in a pond indicates that someone threw a stone, ran a water meter or jumped a frog, the existence of a mysterious substance – dark matter – is determined by its extensive influence on space. Astronomers cannot observe it directly, but dark matter gravity determines the birth, shape, and motion of galaxies. This makes the discovery of last year quite unexpected: in a strange, diffuse galaxy, no dark matter was found at all. Think that’s all? As if not so.

Galaxies without dark matter
Some scientists have welcomed this discovery. Others expressed their doubts, criticizing the measurement of the distance and motion of the galaxy. The stakes are high: if there really is not enough dark matter in this galaxy, this will paradoxically confirm the existence of this substance.

And so, the original team acquired additional evidence confirming its initial discovery. In addition, a second galaxy with similar symptoms was discovered. Where there used to be one ultradiffuse galaxy free of dark matter (at first glance), now there are two.

“One object can always be written off as a unicorn, but as soon as you find two unicorns, you begin to think about the possible existence of unicorns,” says Michael Boylan-Kolchin, an astronomer at the University of Texas at Austin, who did not participate in this study. “And then you start to think about where they come from, what their properties are and how common they are.”

Looking for unicorns
Two galaxies of interest to us are very dim and far from the Earth: photons from their star clusters began to travel toward our planet in the last days of the dinosaurs, about 65 million years ago. The first galaxy NGC 1052-DF2 is about the size of the Milky Way, but contains 100 times less stars. The new galaxy NGC 1052-DF4 is located in the same part of the sky and is about the same in size and mass.

Last March, scientists led by Shani Daniel and Peter van Dokkum of Yale University published a study that estimated the size of NGC 1052-DF2, observing its starlight, as well as the movements of star clusters that surround it. If NGC 1052-DF2 contained as much dark matter as astronomers normally expect from it, dark matter would increase the orbital velocities of these star phenomena. But they move sluggishly, suggesting that dark matter is missing. Critics argue that the speeds of these star clusters were incorrectly calculated — and even if their calculations were correct, the sample size of just 10 star clusters was too modest to reliably determine dark matter reserves in NGC 1052-DF2.

In October, Daniel decided to tackle this issue using a different technique. She took the Keck Cosmic Web Imager, a new instrument recently installed behind the giant Keck telescope in Hawaii, a 10-meter primary mirror. This device can measure light from extremely faint objects with extremely high resolution, making it an ideal tool for studying ultradiffusion galaxies, such as NGC 1052-DF2. This tool was so good that Daniel no longer had to study the movements of the star cluster to determine the mass of the galaxy. Instead, it could get mass directly by directly using the starlight of the galaxy.

In terms of information, starlight contains a lot of it. By dividing light into its constituent colors (this is called spectroscopy), scientists can determine the composition of a star, its age, the direction of movement in space, and speed. Most of this information is transmitted in the form of spectral lines – linear elements embedded in the spectrum of the star due to radiation or absorption of various chemical elements. The Keck tool measured a spectrum of about 10 million stars in a DF2 galaxy. The size of the spread between the fastest and slowest stars in the galaxy gives an idea of ​​how much matter interacts with them. The greater the matter – dark or some other – the greater the variation in the velocities of the stars.

“To our own surprise, we measured extremely narrow spectral lines, which leave very little space for a larger mass than the mass introduced by stars in the galaxy,” says Danieli. Dark matter is simply no place.

Meanwhile, Eric Emcell from the European Southern Observatory and his colleagues explored the galaxy using the Very Large Telescope in the Chilean Atacama desert. They also discovered a low-velocity dispersion that supports the absent dark matter scenario.

Nicholas Martin, an astronomer from the University of Strasbourg in France, was one of the critics of the original article. In a subsequent paper published last year, he argued that it was too difficult to estimate the mass of the DF2 galaxy based on the movements of the surrounding star cluster. But Martin says he was reassured by the recent results of Daniel and Emsell.

“This became possible thanks to the new instruments that arrived at the largest telescopes on the planet. And, honestly, a year ago it was not obvious to me that this would be feasible. A year ago, I was not ready to say that this system would be necessarily necessarily strange, because it seemed to me that measurements were not fully supported by data. But now, when there are two different teams that measured the speed range of the stars themselves, I think it became obvious that there is a strange thing. ”

The results of Daniel’s work were presented at a dark matter conference at Princeton University and will be published in the Astrophysical Journal Letters.

In general, her research suggests that there is a whole class of galaxies so poor in dark matter.

In search of missing matter
Some astronomers are puzzled over how such galaxies could have formed and where dark matter went. Boylan Kolchin says that one of the possibilities is the gravitational pull of the neighboring, much larger galaxy, separated from dark matter. Or, DF2 and DF4 may not be galaxies at all, but modest collections of stars disguised as galaxies; in this case, these isolated groups of stars may form from colliding gas jets emanating from another location. Or there may be even more boring scenarios, for example, the orientation of galaxies relative to the Earth, which adversely affects the obtaining of accurate spectral measurements of their movements.

One thing is for sure: if no weighty doubts appear, the absence of dark matter in galaxies will convincingly show that this matter is separable from stars, gas, dust, and other ordinary matter. And this, in turn, will strengthen the argument in favor of the existence of dark matter.

To date, no one has accurately discovered dark matter, despite decades of active searching. The lack of evidence prompted some astrophysicists to look for alternative ways to model galaxies and control their movement through the emergence of hypotheses like “emergent gravity” and “modified Newtonian dynamics.” Proponents of these hypotheses argue that most astronomers believe that dark matter may be a phenomenon that arises from physics, which we do not fully understand. But in this case, these strange galaxies will speak in favor of the fact that the alternatives are wrong and that dark matter can actually be the cause.