Earth from a distance of a million kilometers 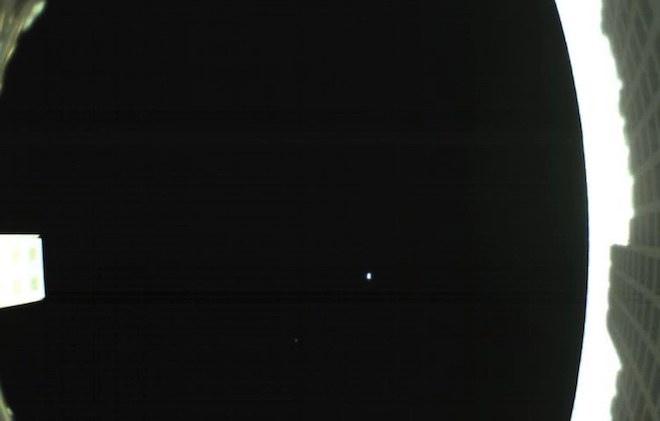 In 1990, the Voyager-1 NASA probe made a cult photo of the Earth with a distance of 6 billion km. It was called Pale Blue Dot (“pale blue dot”). Quite recently, a version of the “pale blue point” was presented by the kubsat – a generation of ultra-small artificial Earth satellites for space exploration.

NASA set a new record for the range for the Kubbs on May 8, 2018, when the mission of the Mars Cube One (MarCO) reached a distance of 1 million km from the Earth. Most of the kubbaths never go beyond the Earth’s orbit, but the mission of MarCO can overcome tens of millions of kilometers.

One of the pair of kubbaths, called MarCO-B, used a panoramic camera “fisheye” to take its first picture on May 9, 2018. This photo became part of the process used by the engineering team to confirm that the antenna with a high gain is properly deployed.

In the picture you can see the Earth and the Moon, similar to tiny dots floating in outer space. According to the chief engineer of the mission Andy Klesh from NASA’s Jet Propulsion Laboratory, the picture can be regarded as a tribute to Voyager. He noted that the kubbaths had never before overcome such a distance, so this is an important stage. Both spacecraft are functioning properly and the team expects that they will be able to go even further.

Marco Cubbs were launched on May 5 in conjunction with NASA’s InSight mission, within which a research landing machine with a seismometer will be delivered to Mars to study the internal structure of the Red Planet. The Marco-A and Marco-B Kubsat will follow InSight to Mars. If their journey is successful, they will be able to transfer data on the entrance of InSight into the atmosphere of the planet and about its primsneniya on the surface.