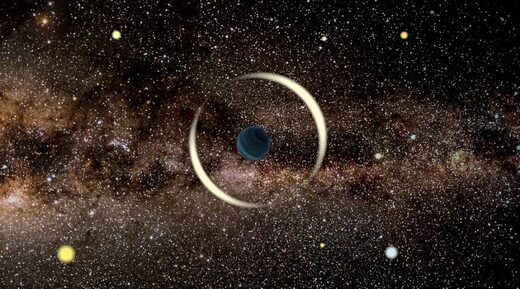 Earth orbits the sun like a ship sailing in circles around its anchor. But what if someone — or something — cut that ship loose? Unbound from any star or solar system, what would become of a tiny world flying helplessly and heedlessly through interstellar space? What happens when a planet goes rogue?

Scientists suspect that billions of free-floating or “rogue” planets may exist in the Milky Way, but so far only a handful of candidates have turned up among the 4,000-or-so worlds discovered beyond our solar system. Most of these potential rogue planets appear to be enormous, measuring anywhere from two to 40 times the mass of Jupiter (one Jupiter is equivalent to about 300 Earths). But now, astronomers believe they’ve detected a rogue world like no other: a tiny, free-floating planet, roughly the mass of Earth, gallivanting through the gut of the Milky Way.

This discovery, reported today (Oct. 29) in the Astrophysical Journal Letters, may mark the smallest rogue planet ever detected, and it could help prove a long-standing cosmic theory. According to the study authors, this little world could be the first real evidence that free-floating, Earth-sized planets may be some of the most common objects in the galaxy.

“The odds of detecting such a low-mass object are extremely low,” lead study author Przemek Mroz, a postdoctoral scholar at the California Institute of Technology, told Live Science in an email. “Either we were very lucky, or such objects are very common in the Milky Way. They may be as common as stars.”

Most exoplanets in our galaxy are visible only because of their host stars. In a literal sense, stars provide the light that allows astronomers to directly observe alien worlds. When a planet is too small or too distant to be seen directly, scientists can still detect it from the slight gravitational pull it exerts on its host star (called the radial velocity method) or by the flickering that occurs when a planet passes in front of the star’s Earth-facing side (the transit method).

Rogue planets, by definition, have no star to light their way — or to light a telescope’s way to them. Instead, detecting rogue planets involves a facet of Einstein’s theory of general relativity known as gravitational lensing. Through this phenomenon, a planet (or even more massive object) acts as a cosmic magnifying glass that temporarily bends the light of objects behind it from Earth’s perspective.

“If a massive object passes between an Earth-based observer and a distant source star, its gravity may deflect and focus light from the source,” Mroz explained in a statement. “The observer will measure a short brightening of the source star.”

The smaller that light-bending object is, the briefer the star’s perceived brightening will be. While a planet several times the mass of Jupiter might create a brightening effect that lasts a few days, a measly planet the mass of Earth will brighten the source star for only a few hours, or less, the researchers said. This exceptionally rare occurrence is called “microlensing.”

“Chances of observing microlensing are extremely slim,” Mroz added in the statement. “If we observed only one source star, we would have to wait almost a million years to see the source being microlensed.”

Fortunately, Mroz and his colleagues weren’t observing just one star for their study — they were watching hundreds of millions of them. Using observations from the Optical Gravitational Lensing Experiment (OGLE), a star survey based at the University of Warsaw in Poland that has turned up at least 17 exoplanets since 1992, the team stared into the center of the Milky Way, looking for any signs of microlensing.

In June 2016, they witnessed the shortest microlensing event ever seen. The star in question, located roughly 27,000 light-years away in the densest part of the galaxy, brightened for just 42 minutes. Calculations showed that the offending object was not bound to any star within 8 astronomical units (AU, or eight times the average distance from Earth to the sun), suggesting it was almost certainly a tiny planet on the run, ejected from its home solar system after a brush with a much more massive object.

Depending on how far away the planet is from the source star (it’s impossible to tell with current technology), the rogue world is likely between one-half and one Earth mass. In either case, this roaming world would be the lowest-mass rogue planet ever detected. According to Mroz, that’s a “huge milestone” for the science of planet formation.

“Theories of planet formation have predicted that the majority of free-floating planets should be of Earth mass or smaller, but this is the first time that we could find such a low-mass planet,” Mroz said. “It’s really amazing that Einstein’s theory allows us to detect a tiny piece of rock floating in the galaxy.”

Many more tiny pieces of rock may soon follow, study co-author Radek Poleski of the University of Warsaw told Live Science. Future planet-hunting telescopes, like NASA’s Nancy Grace Roman Space Telescope (slated to launch in the mid-2020s), will be much more sensitive to the galaxy’s teensiest microlensing events than the nearly 30-year-old OGLE experiment is, Poleski said. If orphan planets of roughly Earth’s mass are indeed some of the most common denizens of the galaxy, it shouldn’t be long before many more of them turn up.