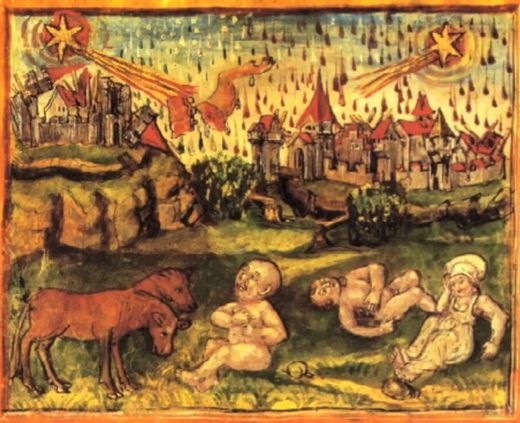 Astrophysicist Victor Klub and astronomer Bill Napier published a study called Space Winter, which presented an orbital analysis of several meteor showers that hit the Earth every year. Using sophisticated computer programs, they studied thousands of years of history, traced the orbits of comets, asteroids and meteor showers, and found something amazing.

Many meteor showers are associated with each other, such as Taurids, Perseids, Piscids, and Orionids. In addition, some very large space objects are related: comets Encke and Rudnicki, asteroids Oljato, Hephaestus and about a hundred others. Each of these more than 100 cosmic bodies is at least half a mile in diameter (0.8 km) and several miles wide.

And what do they have in common? According to scientists, all these objects are descendants of one huge comet, which entered our system less than 20,000 years ago. Klube and Napier calculated that, given all the fragments scattered throughout our solar system, this comet must have been huge.

Given the subtle changes in the Earth’s orbit and “space debris”, Klube and Napier also calculated that the Earth crosses the densest part of the giant cometary belt every 2,000 to 4,000 years.

If you look at the chronology of climate change and anticipated global cataclysms, you can trace this pattern.

The earliest peaks represent the strongest collisions; since then, the “bombardments” have become weaker and weaker each time, since the remnants of the comet disintegrate into smaller and smaller fragments.

But the danger has not yet passed. Some of the remaining fragments are about one and a half kilometers in diameter, which is large enough to cause serious damage to our cities, climate and the global economy.