Elon Musk promises to send people to Mars in 2024 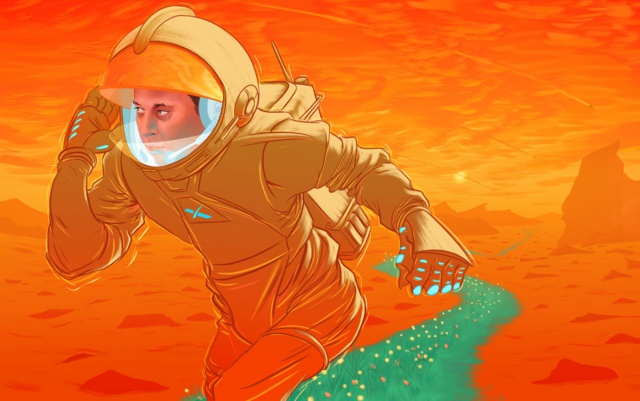 Elon Musk, CEO of TeslaMotors and SpaceX, plans to send an expedition to Mars in 2024, and in the next four to five years is going to fly into orbit.

According to the businessman, SpaceX intends to 2018 to be sent to Mars unmanned Flying Dragon 2, and in 2024 to send to the planet the first man.

“Flying Dragon 2 is designed to deliver astronauts to the ISS. But we’re going to send one craft to Mars in 2018”, — quotes the words of CNBC Mask. It is reported that the device will go to Mars every 26 months. It is also noted that 2 Flying Dragon capable of carrying seven people, flight to Mars would take about 18 months.

Elon Musk is seriously considering Mars as the most suitable candidate for the resettlement of the Land. In the possession of the owner of the company SpaceX, which has announced plans to start colonization of Mars, back in 2012 the idea of Elon musk, in the first expedition will consist of 10-15 people who will go into space with equipment for industrial production of methane and oxygen.

It should be noted that as a means of exploration of the red planet, Elon Musk admits the thermonuclear bomb dump, in order to warm the planet. And then you can start colonization.

During last year’s interview with the late night show Stephen Colbert businessman talked about the colonization of Mars and the two ways that will make the planet warmer.

“In order to make Mars suitable for life, it is necessary to raise the temperature, melt the polar ice caps and create the greenhouse effect. It is possible to heat the planet with greenhouse gases, but this method takes too much time, ” said Musk. – The fastest way to warm the atmosphere of the red planet is to detonate nuclear missiles at the poles of Mars.”

In response to this remark he said that the plan to reset to planet missiles is more common in supervillains, and asked the Mask, not whether he identifies himself with such anti-heroes. The inventor himself was unable to decide whom he sees himself as a superhero or a supervillain. Musk has said he does not want to be classified in one of these categories.

In January 2015, Musk announced that it will create space in the global system of satellites that would provide Internet to all the inhabitants of Earth and colonized Mars. For distribution space Internet Musk plans to launch 700 satellites into orbit, which will operate at an altitude of 1200 kilometers. “We consider the project as a long-term revenue source for SpaceX to Fund city on Mars,” — said Musk.