Europe refused to participate in the mission to prevent “asteroid Armageddon” 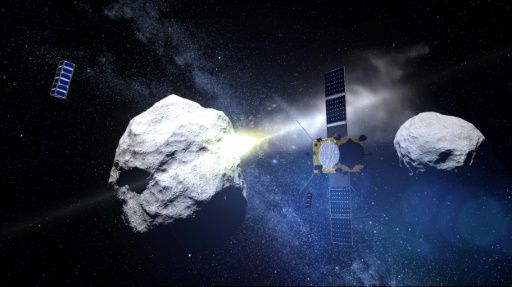 The mission, whose main goal is the collision of the spacecraft with the satellite of the asteroid to change its trajectory, is experiencing financial difficulties.

This joint European-American mission called AIDA (Asteroid Impact Deflection Assessment). In 2022 in the framework of this mission, NASA plans to launch a 600-pound spacecraft to Deimos, the asteroid, located at a distance of about 13 million kilometers from Earth. After two years of space travel, the machine will make a collision with a small companion 800-meter Didymos, known under the unofficial name Digimon, at a speed of about six kilometers per second. The purpose of this maneuver is to change the trajectory of this space rock with a diameter of 160 meters to check the efficiency of this kind of technology for diverting asteroids, some of which may, in the future, will pose a real threat to the Earth.

The European part of the project is a small device called AIM (Asteroid Impact Mission), who must witness the collision and to measure the parameters of the trajectory of the satellite of asteroid after the collision.

In December at a meeting of European space Ministers, it was decided to refuse the European space Agency requested the project financing with a volume of € 250 million. Currently, the Agency remained about two months to find the money to continue development of this spacecraft, because by the end of this period expires, the contracts with major companies, contractors and leading design. Europe’s abandonment of its part of the AIDA mission will mean that observations of the collision of the spacecraft NASA asteroid Digimon will be made only from the Ground.