ExoMars rover now has a “garage” 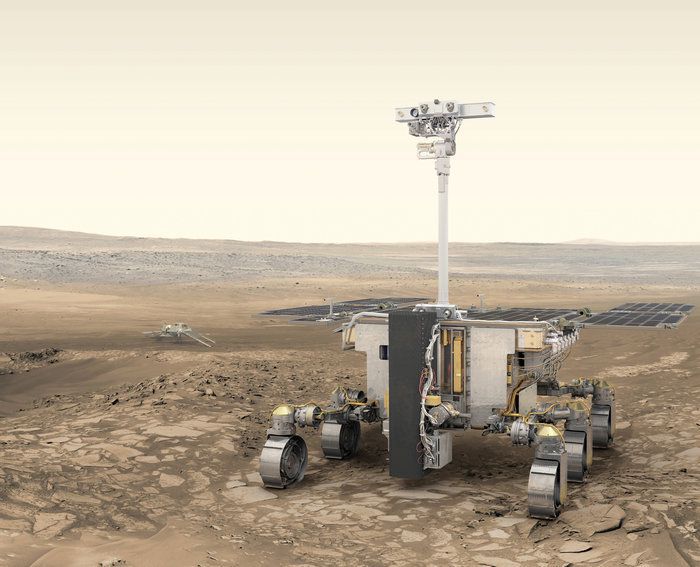 In less than two years, the Rosalind Franklin rover will leave the Kazachok landing module on the surface of the Red Planet.

“Rosalind Franklin” is the name of a new European rover, which will search for traces of life on the Red Planet after landing, scheduled for February 2021. The name of the rover, which was announced last month, pays tribute to the memory of the crystallographer, who helped to establish double helix structure of DNA.

And “Kazachok” is the recently announced name of the new Russian-made landing platform, which will serve as a “base” for the Rosalind Franklin rover – and in addition, it will conduct independent scientific research.

Together, the Rosalind Franklin rover and the Kazachok landing gear are a complete set of equipment from the second stage of the ExoMars program, implemented jointly by Roskosmos and the European Space Agency (ESA). During the implementation of the first phase of the program, an orbiter Trace Gas Orbiter (TGO) and a Schiaparelli demonstration boarding module (Schiaparelli) were sent to Mars in March 2016.

The TGO arrived safely to Mars and is currently exploring the planet from orbit. The Schiaparelli module crashed into the surface of the Red Planet in October 2016 after a computer crash.

Roal “Rosalind Franklin” will search for traces of ancient life on the Red Planet, in which he will be helped by the installation for drilling rocks, capable of diving into the ground to a depth of two meters. The stationary module “Kazachok” at this time will analyze the climate and atmosphere of the planet, measure the level of radiation background and conduct a search for water in its location zone, ESA representatives said.

The Kazachok module arrived in Turin, Italy, from Russia on Tuesday, March 19. The landing platform and the rover have already passed a number of joint tests, but they will have to pass even more tests before launch, scheduled for July 2020 from the Baikonur cosmodrome site.