Explanation of the appearance of the mysterious immortal star 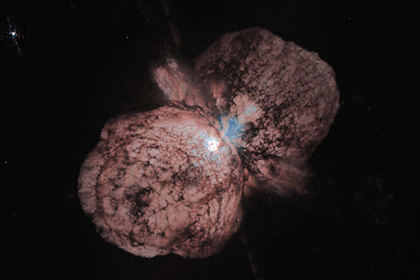 American astronomers from the University of Arizona and the Space Research Institute using the NASA space telescope explained how this Keel’s star survived a series of outbreaks in 1837-1856, during which the energy was comparable to a supernova. This is reported in a press release on Phys.org.

This Kiel, removed by 7.5 thousand light-years from the Earth, is a variable double star, one of the components of which is a bright blue hypergiant with a mass of 150-250 solar. It is unstable and periodically loses some of its mass, and in the future it is expected to become a powerful supernova. Since 1837, this Kiel entered the 18-year period, called the “Great Flash”, when it significantly increased the brightness, and then became indistinguishable to the naked eye. However, it again strengthened its brilliance in 1887 and in 1998.

Scientists analyzed the light echoes from the “Great Flare” of This Kiel. This phenomenon occurs when light from a source is reflected from other objects and arrives at the observer with a delay. It turned out that the release of the substance occurred 20 times faster than expected, that is, the outbreak was typical of a supernova, and not for a strong stellar wind emanating from a massive star.

Scientists suggested that the increase in the shine of Eta Kiel was due to the destruction of the third star in the system, while the mass was thrown into space by 10 solar. Toward the end of his life, one of the luminaries expanded and lost a significant part of the mass, which flowed to a neighbor who swelled and increased his brightness. The donor star moved away from its companion and began to interact with the outer second star, which was thrown into the system, to the hypergiant. As a result, the two stars collided, which gave rise to the “Great Flare”.

The donor star thus survived and begins to turn around the hyper giant at a frequency of 5.5 years. As it passes through the Homunculus nebula every time, formed as a result of a flash, it causes a constant increase and a drop in the brightness level.