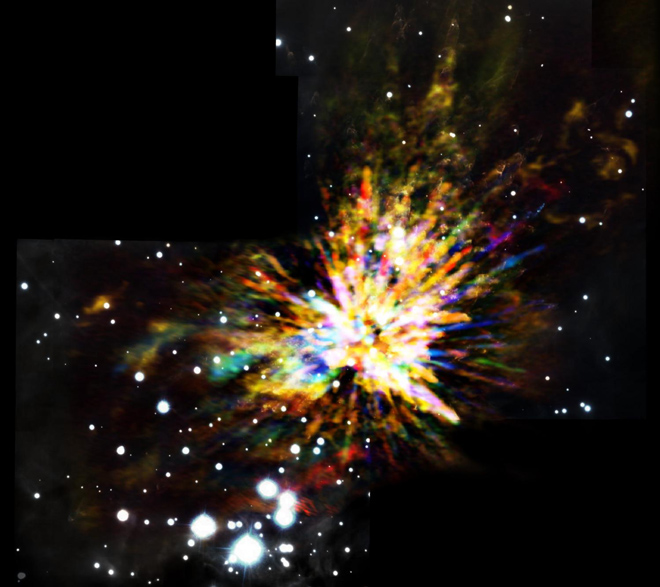 Star birth can be a really strong and explosive event. About 500 years ago a pair of young protostars risked approaching each other for a dangerous distance. As a result, starry creches flew in different directions. Astronomers using a complex of radio telescopes ALMA, investigated widely scattered fragments from this explosion, having received a new idea about the once dramatic relations between native stars.

100,000 years ago, shortly after the beginning of its formation, several protostars in the molecular cloud of Orion 1 (OMC-1), a dense and active star factory fifteen thousand light-years from Earth, echoed with each other gravitationally and gradually converged. Eventually, two of these stars either touched one another or collided, causing a powerful explosion in which neighboring protostars and hundreds of giant dust and gas jets flew into interstellar space at a speed of more than 150 kilometers per second. This interaction has released as much energy as our Sun emits for 10 million years.

Today, the remains of this spectacular explosion are visible from Earth. “What we see in this once quiet starry nursery is a cosmic version of the festive fireworks, when giant jets fly in all directions,” said lead author John Bally of the University of Colorado.

Groups of stars, such as in OMC-1, are born when a cloud of gas, hundreds of times more massive than our Sun, begins to collapse under the action of its own gravity. Protostars form in the densest regions and begin to drift randomly. Over time, this random movement can weaken, allowing some of them to shift to the common center of gravity, which usually belongs to a particularly large protostar.

If these stars approach too close to each other, powerful interactions can occur before they leave for the galaxy. According to the researchers, such explosions are relatively short-lived, and the remnants are similar to those observed by the ALMA telescope over the centuries.

The new data reveal important details about the distribution and high-speed motion of carbon monoxide (CO) gas inside the jets. This helps astronomers understand the power source of the explosion and the impact of such events on the formation of stars in the galaxy. Although fleeting protostellar explosions can be relatively common, such that they destroy their parent cloud, they can also regulate the rate of star formation in these giant molecular clouds.

“People most often associate starbursts with ancient stars, for example, the eruption of a new star on the surface of a decaying or even more exciting supernova death from an extremely massive star. The ALMA observatory has provided us with a new understanding of the explosions at the other end of the stellar life cycle – birth. “