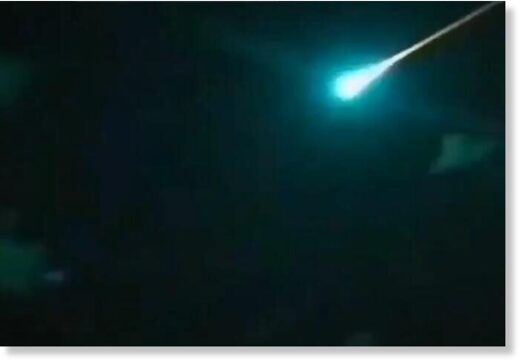 A large meteor was visible from almost all of Puerto Rico, the Caribbean Astronomical Society (SAC) reported.

“Although most meteors are only visible for a few seconds, this event was significant because the pictures we were able to take show that it was visible for 27 seconds, which is almost half a minute,” said Eddie Irizarry, SAC vice president.

“It looked bigger and bigger, it didn’t look like a normal meteor,” said Idali Correa, who observed the impressive sight from the municipality of Guayanilla.

The SAC director explained that despite the long duration of the meteor, it was not space debris, but a natural meteor, that is, a space rock breaking up in the atmosphere.

He estimated that it was a 2 to 5 meter diameter block, whose trajectory shows that it began to break up 70 miles (110 kilometers) above the northwestern part of Puerto Rico, near Isabela Island, and was moving in an easterly direction toward the small island of Culebra.

“Several cameras we have in different parts of the island show that it became visible at 4.55 at 35 seconds and culminated at 4.56 at 2 seconds. It practically crossed the sky almost from one end to the other,” stressed Juan González Alicea, president of the SAC.

Representatives of the scientific organization explained that the duration of the meteor was due to the fact that it was larger than those caused by ordinary meteors because it entered the atmosphere at a not very high angle, that is, almost laterally, resulting in the disintegration of most of the sky.

Alex Guadalupe of the SAC was able to observe it from the Capital Region and was surprised not only by its obvious size and extensive tail, but also by the fact that it showed a turquoise-green color, which, according to the SAC, suggests that the rock contained magnesium and copper.