Far Galaxies Discover the Mysteries of the Dark Universe Epoch 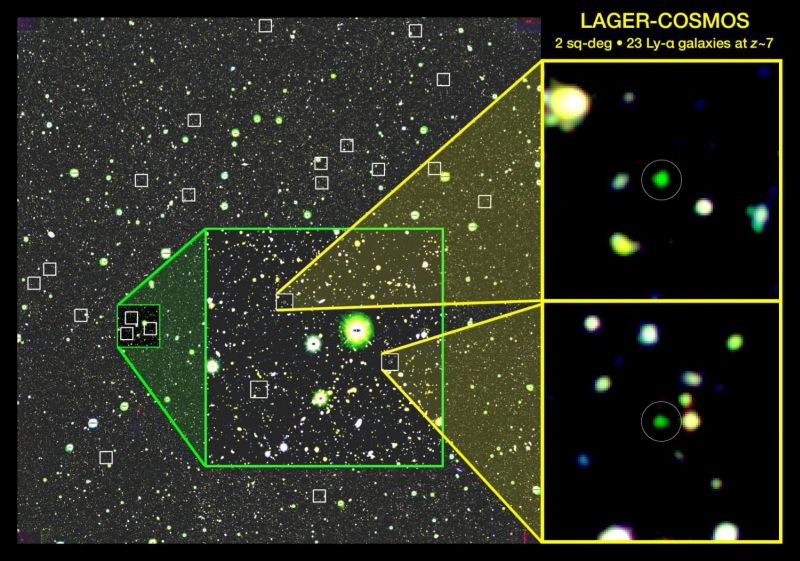 Astronomers studying the distant universe found that small galaxies with active star formation were fairly widespread in the universe at a time when its age was only 800 million years, that is, on the order of a few percent of its current age. These results indicate that the very first galaxies that illuminated and ionized the universe were formed in an even earlier era.

Many billion years ago, at a time when the age of our universe was only 300,000 years old, the universe was impenetrable to light. It has not yet formed stars and galaxies, and the universe was filled only with neutral gaseous hydrogen. At some point, the first galaxies appeared in the universe, and their powerful radiation ionized the neighborhood of galaxies, filled with gas from intergalactic space, illuminating them with their light and transforming the universe.

The establishment of precise time frames for the ionization of our Galaxy is not a fully solved scientific problem. In a new study, scientists were helped to approach the solution of this problem by observing small galaxies of a distant universe with active star formation. Astronomers studied a population of 23 small galaxies located at a redshift z = 7 (800 million years after the Big Bang) and found that the spectra of a number of galaxies from this set demonstrate intense Lyman alpha hydrogen lines, while the spectra of the rest The numbers of these small galaxies hardly detect such lines, apparently because of clouds of neutral hydrogen around galaxies that scatter photons of lyman-alpha radiation. This means that 800 million years ago around some of the galaxies clouds of neutral hydrogen were still present, while in the vicinity of other galaxies the gas was already ionized. Therefore, the universe was only partially ionized by this time, which means that the first galaxies in the universe appeared earlier than 800 million years after the Big Bang, and the completion of ionization of the Universe occurred already in the subsequent period, the authors conclude.