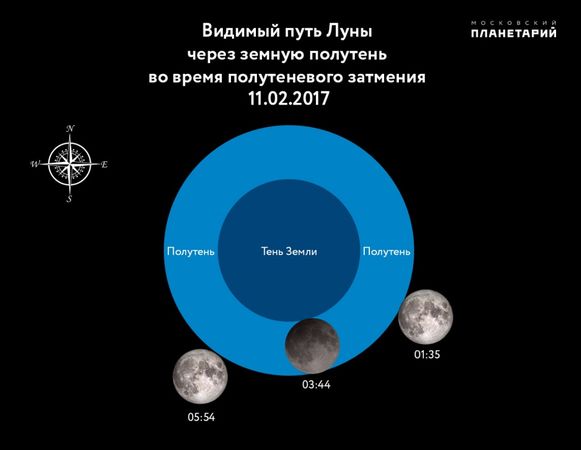 Total Eclipse of the moon from the territory of Russia can be seen until 31 January 2018, and during the night of 11 February, the penumbral Eclipse. And at the same time, the Earth will approach the comet 45R/Honda-Mrkos-Pajdusakova.

Around the cone of shadow of Earth is the penumbra — the region of space where the Earth eclipsing the Sun only partially. Penumbral Eclipse occurs when the Moon passes in this area, but not part of the shadow. The brightness of the moon at this time decreases slightly, but with a clear sky you can see darkening from one edge of the lunar disk.

According to the Moscow planetarium, the next penumbral lunar Eclipse will take place on the night of 11 February, 2017 01:34 GMT-05:53 GMT. The moon is completely immersed in the earth’s penumbra at 1.02 times its diameter. In favorable weather it will be possible to observe a slight darkening of the top edge of the lunar disk — on the whole territory of Russia except the Far East.

The next Eclipse of the moon will take place on 7 August 2017, and it will be private (the Moon in the full shadow of the Earth only partially). Total Eclipse of the inhabitants of the globe will be able to see 31 January 2018.

Another near an astronomical event – the approach of the comet 45R/Honda-Mrkos-Pajdusakova. It orbits the Sun over of 5.26 years, that is, happens in the sky over our planet often enough. 11 Feb 45R will be as close as possible to the Ground, of 0.08 astronomical units (about 12 million kilometers)