Find the cause of mysterious fast movement of our Galaxy 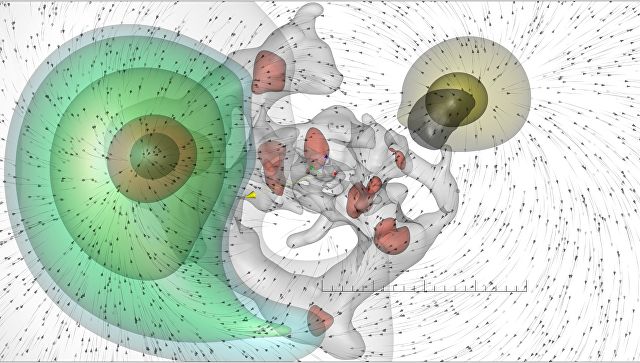 Astronomers discovered that the milky Way is now moving with abnormally high velocity, exceeding the pace of expansion of the Universe, due to the fact that it pushes a kind of giant cosmic desert and not only attracts the so-called “Great Attractor”.

“By creating a three-dimensional map of the galactic “currents”, we found that the milky way is literally “escapes” from the region with extremely low density of matter, whose existence we never suspected. As it repels matter and attracts it, we called it “a Great Repulsive,” said Yehuda Hoffman (Yehuda Hoffman) from the Hebrew University of Jerusalem (Israel).

In the mid-70s of last century astronomers discovered that the milky Way and its neighbors are not deleted as predicted by the theory of expansion of the Universe, and moving in the direction of some other galaxies at a speed of 2 million miles per hour.

This movement, as shown by observations in the 90-ies and 2000-ies, was associated with the so-called “Great Attractor” – is potentially the largest object in the Universe, a giant cluster of galaxies centered in the cluster of galaxies Abell 3627. It covers half of the sky of the southern hemisphere and is located 150 million light years from Earth.

Despite the obvious relationship between them, scientists could not explain why this group of galaxies are “pushing” the milky Way in the direction in which it moves. The “Great Attractor”, in turn attracted an even larger object, a cluster chapli located 600 million light years after him.

Hoffman and his colleagues found that this case is not limited to, creating large-scale three-dimensional model closest to us the surrounding area of space and calculate the speed of movement of all neighbouring galaxies and the gas flows around them, using the images obtained with the Hubble project Cosmicflows-2.

These data unexpectedly indicated the presence of another major gravitational player with even more unusual properties – it pushes, not attracts matter, and is directly behind the “back” of the milky Way. Inside it, as shown by analysis of the images, contains almost no visible matter and galaxies, which scientists began to call him “the great cosmic desert” or just “Great Repulsive”.

This mysterious structure, according to the calculations of Hoffman and his colleagues, pushes the milky Way with the same force with which it attracts the “Great Attractor” and the accumulation seiple, so that our Galaxy and all members of the local group of galaxies move faster than “stretch” the distance between them as a result of expansion of the Universe under the influence of dark energy.

Scientists believe that this structure may be associated with the void between the threads of the “giant cosmic web of the Universe” – a network of umbilical cords of dark matter, which unites all the galaxies and clusters of galaxies. Its study will help to understand how often such “repulsive” found in the universe and how they affect life and the birth galatcic.