First planet in another galaxy discovered

Astronomers have discovered something very similar to an exoplanet outside the Milky Way. If this discovery is confirmed, it will be the first known planet in another galaxy.

The details are set out in the preprint of the scientific article published at arXiv.org.

Humanity knows about four thousand exoplanets. However, they are all in the Milky Way. Moreover, almost all of them are located within a thousand light-years from the Sun, that is, in the closest by galactic standards to its vicinity. This is understandable: the sensitivity of modern telescopes is simply not enough to detect more distant worlds, which by themselves do not emit any light.

True, there are rare reports of the discovery of planets outside the Milky Way. But all such results are controversial. Until now, evidence of the existence of extragalactic exoplanets was so circumstantial that scientists could not even say which stars these celestial bodies revolve around.

Perhaps now astronomers have discovered the extragalactic world for the first time in a fairly reliable way. The approach they have taken is very similar to the transit method, which gave mankind over 70% of known exoplanets.

Let us recall what this technique is. When a planet passes between its sun and the observer (this passage is called transit), it obscures part of the star’s light. The observed brightness of the luminary decreases slightly. On the curve showing the dependence of the star’s brightness on time (light curve), a depression of a characteristic shape is formed. Such dips are repeated with each revolution of the exoplanet around the star. They signal the existence of a distant world.

In this case, scientists also found a transit on the light curve. Only we are not talking about visible light and not about an ordinary star. A characteristic dip was found in the X-ray radiation of a celestial body, which can be a neutron star or a black hole. 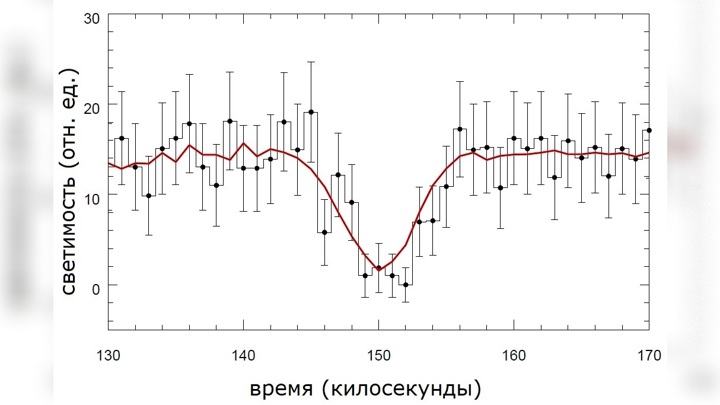 Object M51-ULS-1 is a very powerful X-ray source. In the X-ray range alone, it emits a million times more energy than the sun at all wavelengths combined. Due to its brightness, this celestial body is clearly visible in terrestrial X-ray telescopes, despite the fact that it is located in the galaxy M51, 23 million light-years from Earth. By the way, M51 is also known as the Whirlpool because of its beautiful spiral shape.

Astronomers believe that M51-ULS-1 is a neutron star or a stellar mass black hole around which an ordinary star revolves. The powerful gravity of the cartridge literally pulls out streams of gas from this star. The material falls on M51-ULS-1 and becomes very hot in the process, making it shine brightly in X-rays.

While processing data from the Chandra X-ray telescope, scientists stumbled upon something strange. On September 20, 2012, the luminosity of M51-ULS-1 suddenly began to fall. It dropped to almost zero and then recovered again. The whole phenomenon lasted for about three hours. As the authors of the study note, this dip on the graph had a symmetrical shape, characteristic of transits. 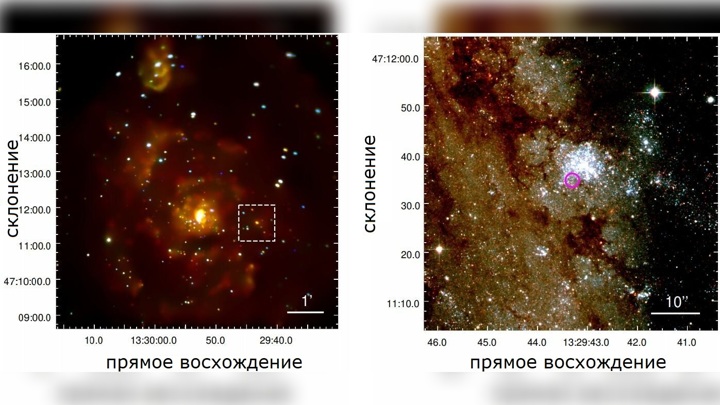 Left: X-ray image of the galaxy M51. Right: visible light image of the area marked with a white rectangle on the left. The position of M51-ULS-1 is marked with a crimson circle. Illustration by R. Di Stefano et al., ArXiv: 2009.08987.

But X-ray sources are generally not so stable, they have flashes and temporary drops in brightness. Maybe we are just facing another manifestation of such impermanence?

Unlikely, the researchers say. When a source reduces luminosity on its own, it is primarily reflected in high-energy X-ray photons, and with a noticeable delay in lower-energy quanta. And the restoration of the previous brightness occurs in the reverse order. However, in this case, the flux of photons of all energies changed synchronously. It is very likely that the source of radiation was temporarily obscured by some body.

If so, what was it? Experts calculated that such an effect could be given by a celestial body slightly smaller than Saturn, orbiting M51-ULS-1 at a distance of a billion kilometers (for comparison: 150 million kilometers from the Earth to the Sun).

An object of this size can be either a planet or a white dwarf. Moreover, the second option is highly unlikely for several reasons. First, the M51-ULS-1 system is too young to contain white dwarfs. Secondly, according to the authors’ calculations, such an object would not cause a decrease in brightness due to transit, but, on the contrary, an increase in brightness due to gravitational lensing.

Summing up, scientists make the following conclusion. The detected drop in the X-ray luminosity of M51-ULS-1 is most likely a transit. And the body that caused this transit is most likely a planet. And if so, then this is the first extragalactic world in the existence of which we can be more or less sure.

Note that the transit must be repeated with each revolution of the exoplanet. The solution suggests itself: to establish constant monitoring of M51-ULS-1 and find out whether regular drops in luminosity occur. Alas, this would have required patience. According to the authors’ calculations, the period of the planet’s revolution around M51-ULS-1 should be measured in tens of years.

But astronomers have a chance to detect many other transits from X-ray sources both in the Milky Way and beyond. After all, experts previously simply did not look for such short-term variations in brightness. This means that a revision of the observational archives can bring many more discoveries.