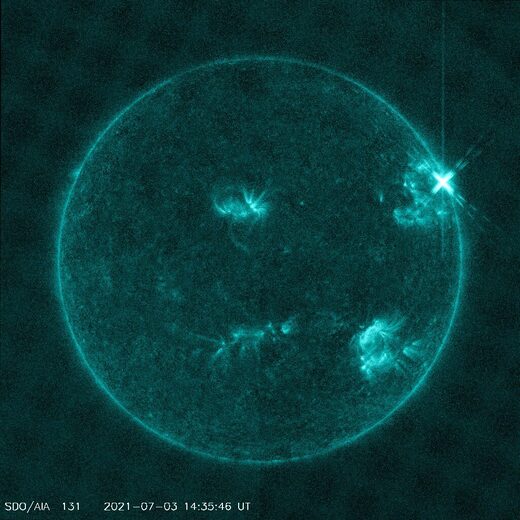 On July 3, sunspot AR2838 erupted on the surface of the Sun and immediately released the strongest X1.5-class solar flare in four years.

As quickly as it appeared, the sunspot had already disappeared. It turned beyond the northwest limb of the Sun on July 4 and will spend the next two weeks passing through the far side of the Sun. If AR2828 stays in place, it will reappear on the Earth-facing side of the Sun in late July.

It is not yet clear whether this flare is a sign of the beginning of a new solar cycle 25 or a flare of cycle 24 activity. On July 3, the new sunspot AR2838 produced the first X-class solar flare since September 2017.

X-bursts are the strongest type of solar flare. They usually cause the deepest radio disturbances and the most intense geomagnetic storms. If this is the first X-flare of the young 25th solar cycle. There will be more in the near future.

During the previous solar cycle (Solar Cycle 24), the Sun produced 49 such flares. Forecasters believe that the 25th solar cycle should be at least as active. Therefore we can expect dozens more X-bursts as the Sun approaches solar maximum in ~2025.

The X-flash that occurred on July 3 did something rare. “It disrupted all my instruments,” reports Rob Stammes, manager of the Space Weather Observatory in Lofoten, Norway. The flash caused a radio burst, a disturbance of the ionosphere, a surge of electric currents in the ground and a deflection of the observatory’s local magnetic field. 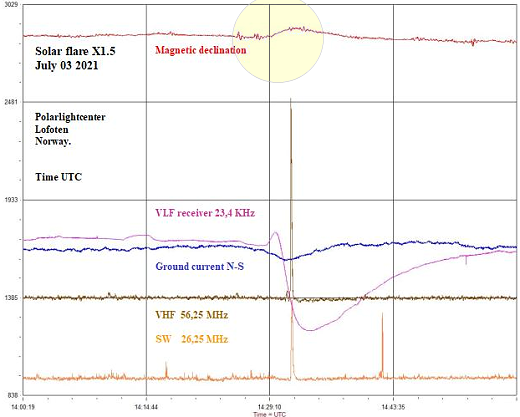 “This is the first case in many years,” Stammes says. “The magnetic disturbance (circled in yellow) is a particularly rare phenomenon.