Floodlight was similar to a bulb from within 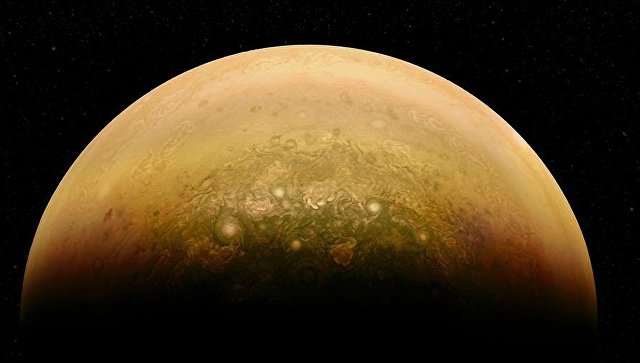 The first data from the probe Juno indicated that the characteristic multilayered structure of Jupiter exists also at big depths that makes it similar to a huge multi-colored puff bulb, participants of a mission of NASA at a briefing in the American astronomical community reported.

“The data from Juno radars received during the second rapprochement with Jupiter were similar to as though we took a bulb and began to remove from it layers one by one. We found out that beautiful orange and white strips which can be seen on the surface of Jupiter exist also on the most deep water on which can glance Juno though the structure of some of them changes with each layer of “bulb” — Scott Bolton, the mission manager from Southwest research institute (USA) tells.

Extremely unexpectedly in NASA declared that instead of the planned scientific phase of a mission which the Juno team planned to carry out on Wednesday instead of rapprochement with Jupiter because of malfunctions in device engines the probe went to the safe mode, having switched-off all tools and devices.

Despite it as Bolton emphasized, the probe is in “absolute safety”, all systems function in the nominal mode and their work nothing threatens. The problem, according to the astrophysicist, is not connected with radiation as it happened from Jupiter at a great distance.

The photo of the South Pole of Jupiter received by Juno
© NASA/JPL-Caltech/SwRI/MSSS
Juno transferred the first and photos of poles of Jupiter, not similar to anything
“Onboard Juno very clever computer which watches a condition of all probe in general and tracks all anomalies is installed. On Tuesday it recorded some unexpected changes in work of its systems and transferred the probe to the safety mode in which Juno expects signals from us. Now we try to find out what forced it to pass into it” — the scientist declared.

For this reason further implementation of the scientific Juno program is postponed for indefinite time, however, as Bolton noted, the first data which cameras and tools of the probe obtained on August 27, during the second rapprochement of Juno with Jupiter, already supplied with the mass of the interesting information on a subsoil and the surface of the giant planet.

The unusual layered structure of a subsoil of Jupiter as Bolton explains, points that in Jupiter there are certain difficult dynamic processes doing possible existence of strips not only on a surface, but also on very deep water in a planet subsoil. According to the scientist, similar opening was a big surprise for the Juno team.

“Other thing which surprised us is that these layers constantly change and evolve that is shown that the structure of strips not always remains at the movement from one layer to another. It is possible to tell that Jupiter at the same time both is similar, and is not similar to how it looks outside. We do not know yet why it occurs” — Bolton explained. 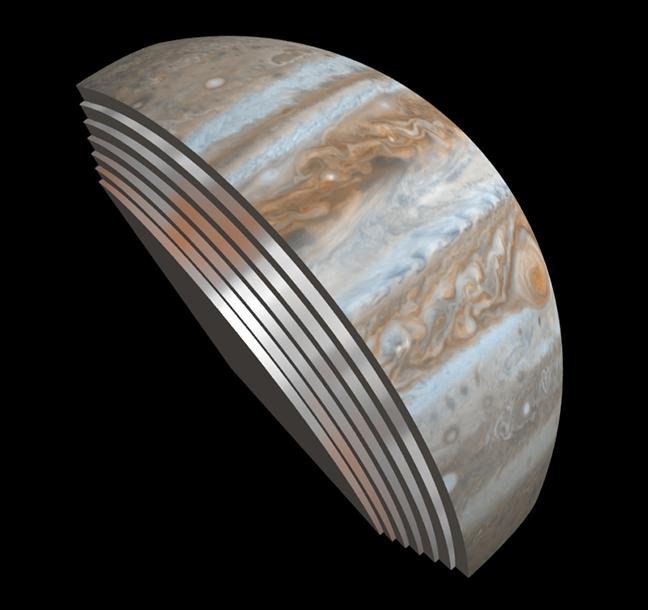 One more interesting opening was the fact that scientists found huge number of hurricanes in the poles of Jupiter removed by means of the camera JunoCam during flight by them in August of this year. Watching behind them during approach of “night” on Jupiter, astronomers could see for the first time the three-dimensional form of hurricanes and clouds of Jupiter, and also their shadow on a surface. The sizes of some of these shadows, according to Bolton, exceed diameter of Earth.

Part of photos of JunoCam and the interesting phenomena in them, according to Bolton and Candy Hansen, the conductress of the project of the camera, were opened by amateur astronomers who participate in the analysis and image processing from the probe. According to Hansen, the decision to connect the audience to serious science more than was repaid.

For example, fans of space managed to find a set of storm and to connect them to dark stains which are visible in photos from Earth and from Hubble, and also to open peculiar “smile” from hurricanes on the South Pole of Jupiter. The best photos will be exposed on the website of NASA, and visitors will be able to vote for the most beautiful pictures of the giant planet.

How the time delay will influence Juno operation? As Bolton claims, it shan’t affect operation of the probe in any way both won’t increase and won’t reduce quantity of radiation which bombards Juno in case of convergence with Jupiter. Therefore Juno will be able to realize the scientific program completely.

“Problems can arise if Juno remains in this orbit very long time, about four-five years. Floodlight doesn’t stand still, and moves around the Sun, and in the middle of 2019 it will fall into such state that Juno will periodically get to areas of the total solar eclipse generated by a shadow of Jupiter which will last about five-six hours. We know that we will be able to endure several similar eclipses, however we have no ideas of yet whether we will be able to survive permanently in such conditions” — the scientist tells.

According to Bolton, specialists of NASA have at least 20 orbits before appearance of similar problems, and he hopes that engineers will manage to understand what forced the probe to pass into the safe mode, to correct problems and to put it to scientific orbit.

“At worst I should become patient and to be accustomed to slow obtaining scientific data. I admit that neither I, nor my colleagues on a scientific command am especially patient people. On the other hand, similar deceleration has pluses – at us will be more time for the analysis of each data set and adjustment of further researches” — Bolton concluded, answering questions.