For the first time, a double ejection of matter from a black hole

Black holes do not just settle somewhere in space, constantly absorbing what is around them. When the matter near them runs low, they freeze, waiting for some stray gas cloud.

Earlier this year, scientists announced the discovery of a double jet – the first time in the history of observations. “Burrs” occurred with a difference of 100 thousand years, which confirms the theory that supermassive black holes pass through cycles of hibernation and activity.

They do not retain in themselves everything that gets into them, although we are accustomed to think so. When black holes absorb gas or stars, they also generate a powerful jet of high-energy particles from an area close to the event horizon to the point of no return.

“Black holes are gluttonous eaters, but at the same time they clearly do not have enough manners at the table,” said lead researcher Julie Comerford, an astronomer at the Colorado University in Boulder. – There are many examples of black holes emitting single “burps”, but we discovered a galaxy with a supermassive black hole with not one but two “belches”.

This is a supermassive black hole in the center of the SDSS J1354 + 1327 galaxy, or J1354, briefly. It is located about 800 million light-years from the Earth and was first observed in the data of the Chandra space observatory as a very bright X-ray spot. 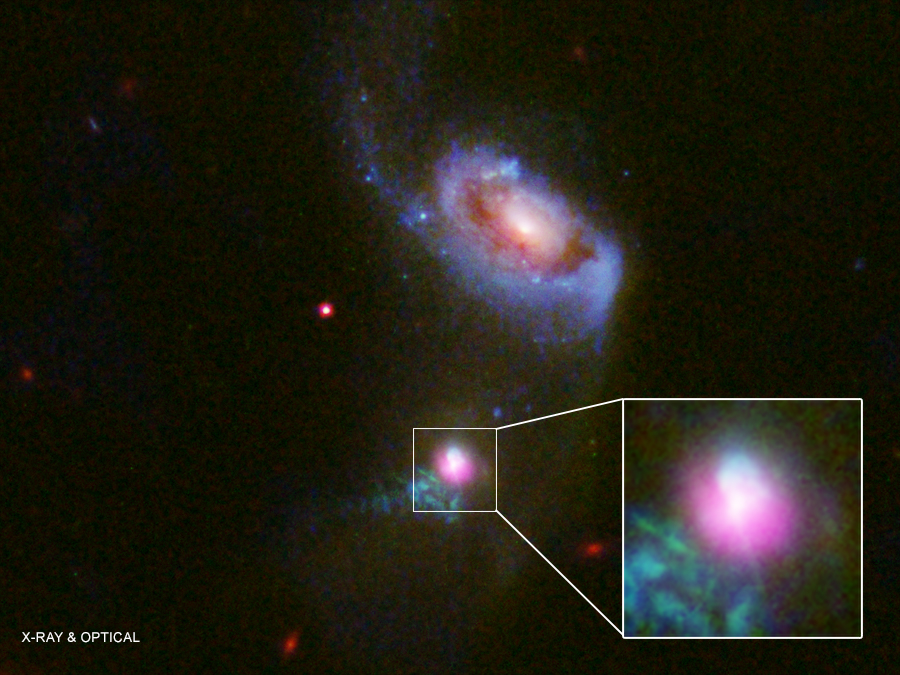 A team of researchers compared X-ray data from the Chandra with Hubble images in visible light and found that the black hole was surrounded by a dense cloud of gas and dust.

“We see how this object feasts, burps and sleeps, and then again feasts and again burps, as predicted by the theory,” says Comerford. “Fortunately, we managed to observe this galaxy exactly when we could see the evidence of both events.”

This evidence consists of two gas bubbles: one above the black hole, the other below it. These are traces of ejection of particles after a “dense dinner”. The scientists managed to find out that the bubbles appeared at different times.

The southern bubble stretches for 30,000 light years from the galactic center, while the northern bubble is only three thousand light-years from it. This phenomenon is known as Fermi bubbles, they can usually be seen after a heavy absorption of matter by a black hole. Based on the speed of movement of these bubbles, the team managed to calculate that the difference between the appearance of each of them is about 100 thousand years.

What should a black hole absorb in order to emit such powerful emissions? Apparently, another galaxy. J1354 has a companion galaxy connected to it by gas and star streams due to their collision. The black hole pulled and swallowed up clusters of material from the second galaxy.

The Milky Way also has Fermi bubbles, which appeared after a tight dinner of Sagittarius A * – our own supermassive black hole. Astronomers are sure that just as the black hole J1354 was eating, sleeping, and then eating again, Sagittarius A * will also awaken one day to eat.