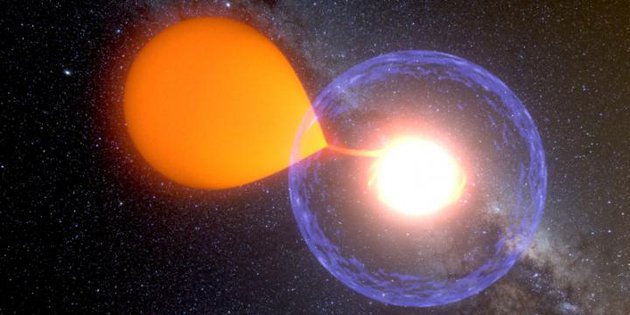 Although there are about 10 of them in the Milky Way annually, astronomers have never observed a single one from beginning to end.

All new – new stars – arise in a close binary system of stars when one of the stars went through the phase of the red giant. She leaves a residue in the form of a white dwarf. Then, when he and his partner star get close enough, the massive gravitational attraction of the white dwarf pulls matter – mostly hydrogen – from another star.

Hydrogen accumulates on the surface of the white dwarf, forming a thin atmosphere. A star heats up hydrogen, and ultimately flares up when the gas pressure becomes extremely high. This is not just a merger: it is fast and rampant.

When a fast fusion occurs, we see light, and a new atmosphere of hydrogen is thrown from the white dwarf into space. In the past, astronomers believed that these bright lights were only the birth of ordinary stars, and the concept of “nova” hung in the air.

Astronomers now call these types “classic” novae; there are also repeated nova when the process repeats.

This process releases a ton of energy: not only visible light, but also gamma rays and x-rays. The end result is that some stars, which could only be seen through a telescope, can be seen with the naked eye at the time of the explosion.

All this is widespread in astronomy and astrophysics, but much is just a theory.

Recently, astronomers using the BRITE nanosatellite constellation (BRIght Target Explorer) have been fortunate enough to observe the entire process from beginning to end, confirming the theory.

BRITE is a constellation of nanosatellites designed to “study the stellar structure and evolution of the brightest stars in the sky and their interactions with the local environment.” They operate in low Earth orbit and have few restrictions on the parts of the sky that they can observe. BRITE is a coordinated project between Austrian, Polish and Canadian researchers.

This first-ever observation of the new was pure coincidence. BRITE spent several weeks watching 18 stars in the constellation Karina. One day a new one appeared: BRITE COO Rainer Kushnig discovered it during a daily inspection.

“Suddenly, a star appeared on our records that hadn’t been on the eve. I’ve never seen anything like it in all the years of a mission! ” – Rainer Kushnig. 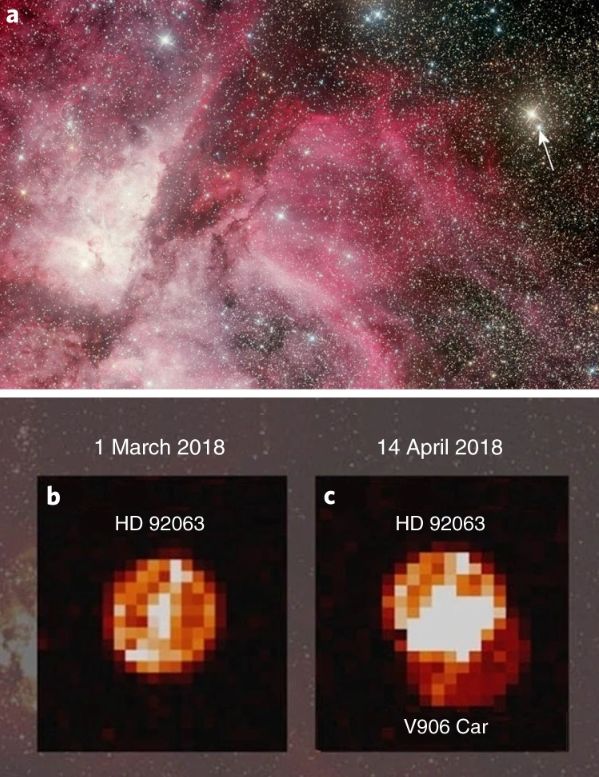 Nova V906 in the constellation Karina. In images B and C, the stars before and after the outburst are new.

“But what makes a previously inconspicuous star explode?” The answer to this question is still not known for certain, ”he said.
The explosion of Nova V906 in the constellation Karina gives researchers some answers and confirms some theoretical concepts.

The V906 Carinae was first discovered using the Polish All-Sky Automated Survey project to track supernovae. Fortunately, it appeared in the region of the sky that was observed by BRITE for several weeks, so the data on the nova are from BRITE.

“It’s amazing that for the first time, our satellites could observe a new star even before its actual eruption, and after many weeks,” – Otto Koudelka, project manager of the satellite BRITE Austria.

There are about 13,000 light-years before the V906 Carinae, so this event is history. “In the end, this new star is so far away from us that it takes its light about 13,000 years to reach the Earth,” Weiss explains.

“This fortunate circumstance played a decisive role in enabling the event to be recorded” is new “with unprecedented accuracy,” explains Constance Zwintz, head of the BRITE research group, from the Institute of Astronomy and Elementary Particle Physics of the University of Innsbruck.

According to a press release, Zwintz immediately realized that “we have access to observational materials that are unique throughout the world.”

New items like V906 Carinae are thermonuclear explosions on the surface of white dwarf stars. For a long time, astrophysicists believed that the luminosity of a new star is activated by constant nuclear combustion after the initial explosion of uncontrolled fusion. But the data from BRITE suggests something else.

These impulses may also be associated with other events, such as supernovae, stellar fusions, and tidal disruptions, according to the authors. But so far, researchers have not observed evidence of this.