For the Milky Way found a huge cluster of galaxies 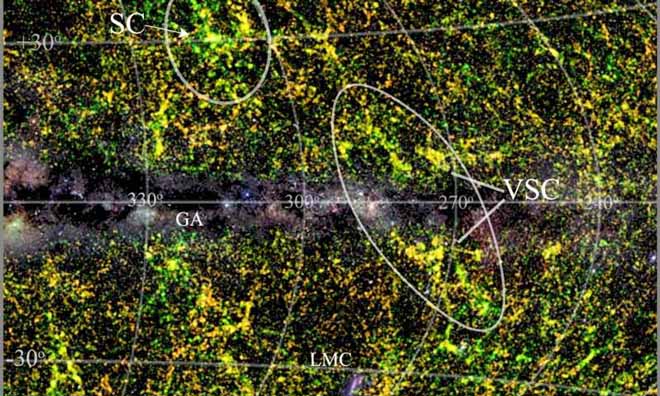 An international team of astronomers has discovered a previously unknown large concentration of galaxies in the constellation Vela, dubbed the Vela supercluster.

The gravitational pull from this massive galactic clusters in our cosmic neighborhood may have a significant effect on the motion of the Local group of galaxies, including the milky Way. The discovery also may help to explain the direction and amplitude of the peculiar velocity of the Local group relative to the cosmic microwave background.

The supercluster was unnoticed because of its location behind the plane of the milky Way where dust and stars are obscured galaxy, which leads to the formation of wide blurred region. The team’s results suggest that the supercluster Led can be as massive as Shapley. This suggests that its impact on the local volumetric flow is no less great.

Professor rené RAAN-Korteweg of the University of Cape town, who led the study and who has studied this area more than a decade, said could not believe my eyes when, together with colleagues analyzed the spectra of a new survey and saw a significant and visible structure. First, scientists have discovered two massive cluster, and then more distant massive clusters in the immediate vicinity.

This space region have been little studied, as the dense star and dust layers interfere with the observations. Scientists hope the new telescope MeerKATM will help them to know the entire size, weight and influence of the supercluster is Led.