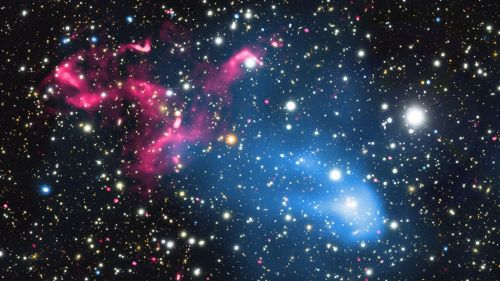 At a distance of two billion light years from us two galactic cluster merge into the intergalactic collapse. At least one of a supermassive black hole generates powerful electromagnetic tunnel. This tunnel accelerates the gas to incredible speeds, effectively becoming a intergalactic analogue hadron Collider — the particle accelerator, “spit” one of the most highly charged radiation in the Universe.

The image above shows a couple of different processes occurring simultaneously and as a result brings “intergalactic Bazooka”. Blue shows the x-ray emission generated by colliding galactic clusters (one of the largest cosmic structures in the Universe) and the resulting orbital x-ray space Observatory NASA Chandra. Each cluster a quadrillion times heavier than our Sun. Dimmer blue glow shows that the gas fills each of the two clusters. In one of them as a result of collision has created shock waves that affect particles in another cluster, causing them to move at the speed of light.

Red marked radiation of radio waves that caught the GMRT in India — world’s largest radio telescope operating at meter wavelengths. This radiation creates black holes (indicated by bright pink bubbles) in the centers of galaxies. The most interesting thing happens when black holes and hot gas begin to interact. Astronomers know that supermassive black holes can accelerate particles inside clouds of gas that surround them. However, when these accelerated particles occur with a shock wave, it is given extra acceleration. A snapshot of this process, scientists have divided into 229 meeting of the American astronomical community, held recently in Texas, and then published their observations in the journal Nature Astronomy.

“This is the first time we have seen such a double speed. First, with the help of a supermassive black hole, and then another, and a shock wave”, — says Ranua Weiren Wang, astrophysicist at Harvard University and lead author of the study.

The presence of such a giant intergalactic particle accelerator could mean that the space can be created and previously unseen particles. Be created in much the same way as them, with the use of high-energy physics and on the Earth’s largest particle accelerator (Large hadron Collider) will generate the scientists themselves. TANK, for example, is now used for observation of the Higgs boson.

“Potentially such a cosmic accelerators can reach energies much higher than our Tank. Perhaps even millions of times greater,” continues van Wieren.

There’s no scientific (and probably never will be) tools for observation of delicate specifics that may occur in space at a distance of 2 billion light years, but van Wieren I am very glad some of the research such giant particle accelerators, astronomers will soon allow for new technology.

“It’s really cool. Since we are not yet able to create such levels of energy on Earth. Perhaps in the future we will be able to learn how to accelerate particles faster than the current TANK, but not now,” concluded van Wieren.