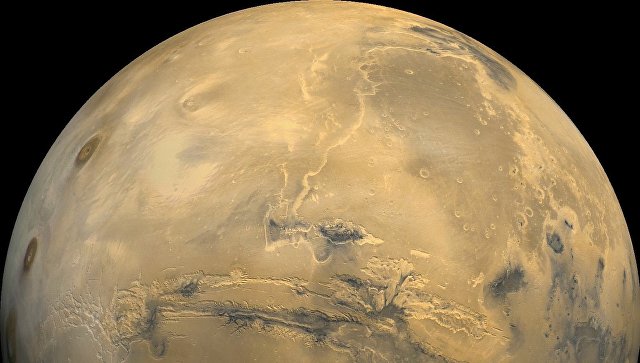 Artificial analogues of meteorites from Mars have shown that their breed could not be formed without the presence of liquid water on the surface of the red planet, scientists say.

“The only thing we have left to prove – we need to show that merillat in meteorites resulted from dehydration of whitlockite on Mars. We need to examine real meteorites from Mars to understand if there is traces of water or not. If even a small portion of merrillia really originated in this way, our ideas about water on Mars will change dramatically,” says Oliver Chawner (Oliver Tschauner) from the University of Nevada, Las Vegas (USA).

In recent years scientists have found many hints that on the surface of Mars in ancient times there were rivers, lakes and entire oceans of water, which contained almost the same liquid as the earth’s Arctic ocean. On the other hand, some planetary scientists believe that even in the ancient era of Mars might be too cold for the continued existence of the oceans, and the water there could exist in the liquid state only during eruptions and after the “bombing” of large asteroids.

Chawner and his colleagues have provided new evidence that liquid water on the surface of Mars could be present in large numbers, at least temporarily. For this they studied and tried to reproduce some properties of Martian meteorites found on Earth in the last few centuries.

All of these meteorites, it tells Chawner have one thing in common – they contain mineral merrillii – a compound of phosphorus, oxygen, magnesium, sodium and calcium, in which there are no water molecules and hydrogen atoms. Merrillat not found on Earth but is present in the meteorites of lunar, Martian and asteroid origin.

The lack of water forced many geologists to assume that Mars, like the Moon and asteroids, were always completely devoid of liquid water, as in this case, the asteroids there would be another “phosphate” mineral – vitacit, where the water is.

A team of Chawner assumed that all stocks whitlockite could disappear from the Martian meteorites for one simple reason. The collision of an asteroid with Mars, which threw them into orbit and sent towards the Earth, could “squeeze” all the water from whitlockite and turn it into merrillat consisting of the same elements, except water.

They checked whether this is so, trying to repeat this process in the laboratory. Using electromagnetic gun, scientists “fired” small pieces of whitlockite iron bullets that traveled at a speed of 2.7 thousand kilometers per hour and creating pressure above atmospheric in 180 thousand times. When such bullets are faced with the mineral, the scientists shone a sample using x-rays and analyzed its chemical composition.

As it turned out, the collision had indeed led to the desired result – about a third of whitlockite turned into a collision in merrillat. Accordingly, we can only find traces or water, or whitlockite in Martian rocks or Martian meteorites for evidence that water was indeed present on Mars in the first era of its existence.

The ideal solution in this regard, it tells Chawner would be the opening inventory of velocitv on the surface of Mars that can do the Martian Rovers and future expedition of astronauts to Mars, the possibility of which in 2020, says the SpaceX company, and in 2030 — NASA.