Found the oldest galactic cluster in the Universe 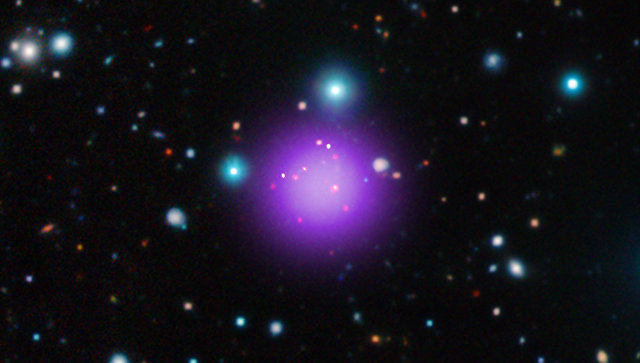 Tao Wang from the Nanjing University of China and his colleagues found in the constellation of Sextans a unique cluster of “star cities” has been removed from the Earth by 11.1 billion light-years away and were formed approximately 7 centuries before scientists believed it was possible.

The cluster, called CL J1001 0220, presented 17 large galaxies with a total mass of 100 trilliardov times more solar. 11 of them are concentrated in the area, the diameter of which is only 260 000 light years. According to scientists, this region is characterized by unusually high density of the stellar population. But interestingly, neither the tightness nor the presence of a hot gas do not interfere with 9 of the 11 galaxies to maintain a fantastic rate of birth of new stars more than three thousand solar masses per year. Modern galaxy, for the activity of star formation is much inferior to these indicators.

Detection of such a distant, ancient, populous and active galactic “company” can access to the astronomers of the many mysteries of the early Universe, the birth of the first stars and their associations in the group.