Found the planet came under the influence of Planet X 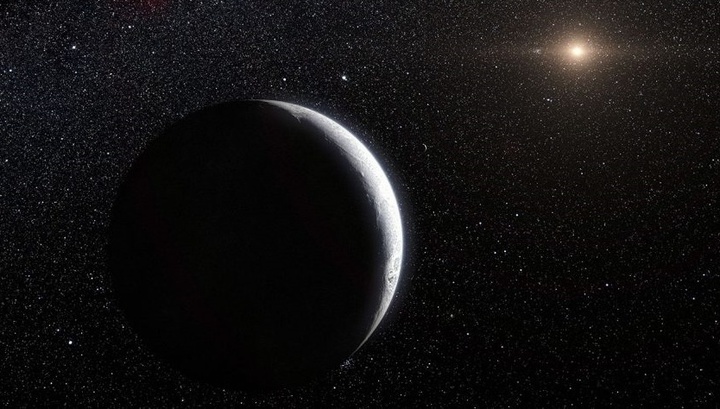 The solar system has gained new curious object: a small icy world L91 with one of the most elongated orbit known to date. Object requires more than 20 thousand years to make a complete revolution around the Sun.

Researchers have yet to determine the size of the ordinary world and its weight, but they can add it to the list of icy bodies spinning far beyond Neptune in a strange orbit. The latter implies a (gravitational disruptions.

Thus, in the case L91, some astronomers believe that the external breaker may be the ninth planet-a giant (which is not even open).

Object L91 managed to find in the study of the evolution of the external part of the Solar system (OSSOS) using the Canada-France-Hawaii Telescope, located atop Mauna Kea on the island of Hawaii.

According to the instrument, the world of ice L91 never approaches the Sun more than 50 astronomical units (one and.e. approximately equal to the average distance from the earth to the Sun). With this distance the object moves slowly to the extreme point of the Sun – up to 1,430 astronomical units.

Based on the findings, the researchers conclude that L91 has a more elongated orbit than Sedna –another remote object the size of Pluto. The closest point of convergence of Sedna from the Sun is 76 astronomical units, and the farthest reaches 937 astronomical units.

Once it was thought that the Solar system was relatively static and current structure of the planets virtually unchanged since their formation in the giant cloud of dust and gas over four billion years ago. But due to recent studies scientists have realized that planetary history is full of surprises and it is also present quite a peculiar movements of the planets.

Some experts believe that the L91 is the so-called Maverick. Astrophysicist Michele Bannister from Queen’s University in Belfast proposed a scenario in which ice object was formed with a more regular elliptical orbit. Then its the nearest and the farthest point from the Sun would be about the same.

Over billions of years the gravitational influence of Neptune might affect the ice object, and as a result it would slightly push that would L91 to the far orbital point all the way up to the inner part of the Oort cloud. Recall that the latter is a cluster of frozen bodies. Astronomers believe that the objects comprising the Oort cloud formed near the Sun and was scattered far into space gravitational effects of the giant planets in the early stage of development of the Solar system.

Then a passing star or gravitational interaction with the milky Way galaxy could draw the orbit of L91 and make it less stretched, but still quite unique – the like of which scientists observe today.

However, not all agree with this theory. For example, planetary scientist Konstantin Batygin of Caltech believes that there is a different preferred scenario. In his opinion, all the matter in the gravitational attraction from the ninth planet. Astronomers believe that it is similar in size to Neptune.

Batygin and his colleague Mike Brown also believe that the existence of a mysterious planet may explain the strange orbit of the extended half a dozen other objects, including Sedna.

Bannister and his colleagues simulated a scenario in which a mysterious ninth planet could provide a gravity kick necessary to obtain elongated orbit L91. But it turned out that in this case the world of ice lurched to the other orbit.

However, Batygin sure that the galactic gravitational attraction is an inefficient process and that the explanation for the unusual orbit using the existence of the ninth planet – is still less convoluted way to achieve the same result.

The researchers reported the discovery and research results on 17 October at a joint meeting of the Department of planetary Sciences of the American astronomical society and the European planetary science Congress.