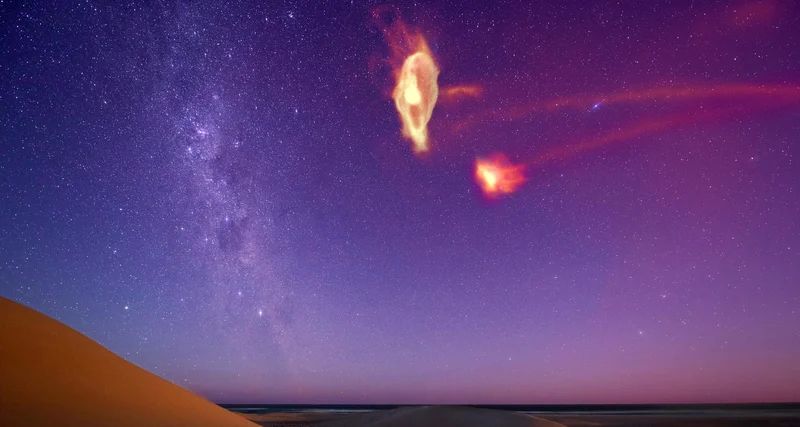 Scientists have found out how the Magellanic stream, stretching across the entire sky, reached its colossal size and mass.

The Milky Way is not alone in space. It captures small galaxies in its orbit, and the two largest of them, known as the Small and Large Magellanic Clouds, can even be seen as double “dust spots” in the Southern Hemisphere.

When the Magellanic Clouds began to orbit the Milky Way billions of years ago, a huge stream of gas, known as the Magellanic Stream, burst out of them. It now extends over half of the night sky. But astronomers have been unable to explain how the stream became so massive and ended up being more than a billion times the mass of the Sun.

Astronomers at the University of Wisconsin-Madison and their colleagues have found that the halo of warm gas surrounding the Magellanic Clouds likely acts as a protective cocoon, shielding dwarf galaxies from the Milky Way’s own halo and making up most of the Magellanic Stream’s mass. When smaller galaxies entered the Milky Way’s sphere of influence, parts of this halo stretched out and scattered, thereby significantly expanding the stream itself. The researchers published their work in the journal Nature.

“The existing models for the formation of the Magellanic Stream are outdated because they cannot explain its mass,” explained Scott Lucchini, a Ph.D. student at the University of Washington, Madison, and lead author of the paper. “That’s why we came up with a new solution that perfectly explains this phenomenon.”

Older models suggested that gravitational tides and the force of galaxies colliding with each other formed the Magellanic Stream from the Magellanic Clouds as the dwarf galaxies entered orbit around the Milky Way. While these models can largely explain the size and shape of the stream, they overlook an important fact: clouds are only a tenth of the required mass.

Astronomers recently discovered that the Magellanic Clouds are massive enough to have their own halo or corona of warm gas. Elena D’Ongia and her team realized that this crown would dramatically change the way the flow was shaped.

In the new system, the appearance of the Magellanic stream is divided into two periods. While the Magellanic Clouds were still far from the Milky Way, the Large Magellanic Cloud has been diverting gas away from its smaller partner for billions of years. This “stolen” gas eventually made up between 10% and 20% of the final mass of the stream.

Later, when the clouds entered the orbit of the Milky Way, the corona lost a fifth of its mass to form the Magellanic Stream, which stretched in a huge arc due to interaction with the gravity of the Milky Way and its own corona.

“The flow is a mystery half a century ago,” said Andrew Fox, one of the co-authors of the study and an astronomer at the Space Telescope Science Institute, which operates the Hubble Space Telescope. “We never had a good explanation of where all this colossal mass came from. What’s really interesting is that we’re finally getting closer to an explanation. ”

The researchers’ proposal can now be verified directly. Hubble needs to see the characteristic signs of a corona of gas surrounding the Magellanic Clouds – and then everything will become obvious.