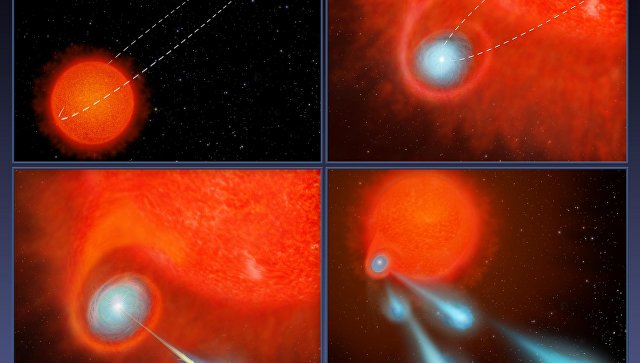 The orbital observatory of Hubble opened an unusual double star in the constellation of the Hydra who “fires” each 8,5 years at surrounding space plasma “bullets” weight to two Marses.

“We knew that from this object something quickly moving proceeds, however we for the first time managed to find this star in the course of plasma ball “vyplevaniye”. We consider that these spheres of the heated gas arising at the last stages of life of stars form unusual structures which can often be noticed in planetary fogs” — Raghvendra Sahai from Laboratory of jet propulsion of NASA in Pasadena (USA) declared.

Sakha and his colleagues opened this unusual star, watching the famous red giants – the stars which are the way out of the life, using tools of Hubble and a number of land telescopes.

All rather small stars similar by the sizes in the Sun or not exceeding its diameter more than by 7-8 times, at the last stages of the life “are inflated”, heat up and turn into red giants. The similar destiny expects our star through 4-5 billion years and when it occurs, the Sun will absorb Mercury and Venus, and also will turn Earth and Mars into the melted spheres from rocks.

One of such stars, the V Hydra, is long enough studied by astronomers for the reason that it is one of the coldest and red giants, close to us, whose atmosphere and a subsoil contains a lot of carbon and almost does not contain helium and hydrogen.

Studying the pictures of this star received by Hubble during the different periods since 2002 and for 2013 the American astronomers found several flashes on a surface of the red giant which led to emission enough large spheres from plasma – their weight approximately twice more, than in Mars, from a star surface in an outer space.

These plasma “bullets” as shows the shift of lines of their range, were “catapulted” from a star with such speed that they moved with a speed of 200-250 kilometers per second – with the same speed the Sun rotates around the center of the Galaxy.

Sees these shots of Hubble each 8,5 years that pushed authors of article on an explanation of the fact that their is “the trigger mechanism”. Him, in their opinion, is the white dwarf, invisible to us, or other superdense object rotating around the V Hydra on the extended orbit and approaching it each 8,5 years. At the time of rapprochements he flies by through the top layers of the red giant, “reels up” on itself(himself) its matter and throws out a part it in the form of superfast plasma “bullets”.

The same “plasma turns” as scientists consider, can explain why the V Hydras periodically sharply grows dull or completely disappears from a firmament for the short periods of time. In such cases, explains Sakhay, the star “shoots” precisely towards Earth, and the cooling-down plasma sphere for a while blocks it from us.

Similar plasma “bullets”, according to scientists, can explain one of old riddles of astronomy – why the planetary fogs born as a result of dumping of external covers by red giants look is so unlike at each other and comprise a set of turbulences, petals and spherical structures.