Free Planet: SpaceX Will Establish Its Own Laws On Mars 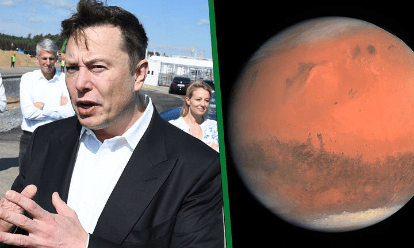 if you are a user of the Starlink internet, the terms of service say that you must recognize Mars as a free planet, ie. Mars will not be governed by any government or authority on Earth.

SpaceX colonies on Mars will not be subject to any Earthly laws. Instead, Elon Musk’s company plans to define its own set of principles and autonomy of government.

This data became known indirectly after the recent launch of the public beta of Starlink , the global satellite internet service. There, in the terms and conditions that usually few read, the ninth point says:

«For services provided to, on, or in orbit around the Earth or Moon, these Terms and any disputes between us that may arise or are related to these Terms, including disputes regarding arbitrability (” disputes “), will be governed and will be interpreted in accordance with the laws of the State of California in the United States. For services provided on Mars, or in transit to Mars via Starship or other colonization craft, the parties recognize Mars as a free planet and that no Earth-based government has authority or sovereignty over Martian activities. Therefore, disputes will be resolved through principles of autonomy, established in good faith, once a Martian settlement has been established .

A broad contract seems like an odd place to reveal your government plans for a new extraterrestrial settlement, however, it is understood considering the fact that colonies on the red planet will likely depend on orbiting Starlink satellites for internet and communications .

Mars Will Be A Free Planet

Elon Musk, CEO of SpaceX, plans to establish a city on the red planet by 2050. With that goal, his company is developing a massive spacecraft called the Starship that will send cargo and eventually passengers.

As for the laws for future colonies, Musk has spoken on the matter previously. During the SXSW 2018 festival, he commented: “Probably the form of government on Mars will be something like a direct democracy … where people vote directly on issues rather than through representative politicians.”

The tycoon has among his priorities to contribute to the idea of ​​humanity as a multi-planetary species , because, according to him, “a future with a civilization that explores space and inhabits other worlds is much more exciting than one without it.”