Full solar cycle in one photo 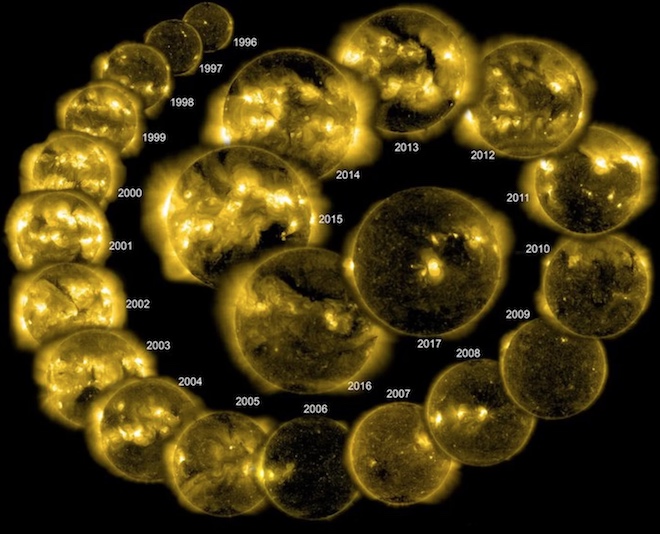 Of the billions of stars in the Milky Way, there is one that orbits at a distance of 25,000 light-years from the center of the galaxy and affects the Earth day in and day out. Of course, this is the Sun. Despite the fact that the cycle of solar activity is tracked for about two and a half centuries, the use of space telescopes opens a new unique perspective for our nearest star.

The solar and heliospheric observatory SOHO – a joint project of NASA and ESA – has been in space for over 22 years, which corresponds to the average duration of one complete solar magnetic cycle.

Scientists combined in one image 22 pictures of the Sun, which were made every spring during the full solar cycle. When the Sun is most active, strong magnetic fields look like bright spots in its outer atmosphere, called the crown. Black spots appear when the concentrations of magnetic fields reduce the temperature of the solar surface during active periods.

The SOHO spacecraft has told a lot about the Sun, fixing solar perturbations, detecting waves passing through the crown, and collecting details about charged particles flying into space, called the solar wind. As noted by scientists, the observation of a full 22-year cycle provides important data on the interaction between solar activity and the Earth and improves the forecasting of space weather.