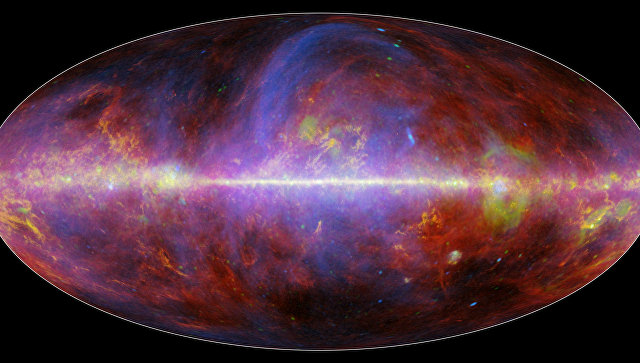 Observations of the largest congestions of galaxies in the visible Universe and space “deserts” between them have helped scientists to confirm that the mysterious dark energy forcing the Universe to extend quicker and quicker really exists, it is told in article published in Astrophysical Journal Letters.

“We have thought up a new technique of conducting very exact observations of how these regions of space influence the microwave background radiation of the Universe – the light echo which has remained since the Big Bang whose photons pass them on the way to Earth. Gravitation of these objects has to bend this light and if dark energy exists then photons from “deserts” will be slightly colder, than light particles from congestions of galaxies” — Sesandri Nadathur from university of Portsmouth (Great Britain) tells.

Long time cosmologists considered that our Universe grows with a constant speed which almost doesn’t change. In 1998 Nobel laureates Saul Perlmutter, Brian Shmidt and Adam Riesz have shown, watching flashes supernew the first type that it actually not so – has turned out that limits of the universe extend quicker and quicker.

The reason of this acceleration as today scientists consider, dark energy – mysterious substance with exotic properties of whose share 70% of contents of the Universe are the share is. We almost know nothing about its properties, and today scientists try to find traces of dark energy in the movements of galaxies and in microwave background radiation.

Using a new technique of observations, Nadatur and his colleague Robert Crittenden have tried to find traces of dark energy in “extension” of photons of “echo” of the Big Bang, using the pictures of far congestions of galaxies and emptiness between them received by the review of SDSS and the data on fluctuations in a microwave background of the Universe collected by the orbital Planck telescope.

Attempts to carry out similar measurements as Nadatur tells, were carried out according to the probe WMAP and to a small number of galaxies earlier, however light curvature force under the influence of dark energy was five times higher, than predicted cosmological models of the Universe system. For this reason most of cosmologists extremely critically belonged to results of similar calculations, including them a mistake.

Using photos over 700 thousand far galaxies and data on “echo” of the Big Bang in their vicinities, Krittenden and Nadatur have checked whether really their predecessors were mistaken. As have shown their own measurements, the effect of extension of light really exists, however his force keeps within predictions of the classical theory of the Big Bang.

For example, “temperature” of the microwave radiation proceeding from galactic “deserts” was 15-5 microkelvins less, than average values, and the “echo of the Big Bang” passing through congestions of galaxies was “5-10 microkelvins warmer” than norm.

Together with other data on dark energy which were obtained recently these results as the British cosmologists consider, demonstrate that it really exists. It is necessary – to understand the most complex challenge how we will be able to see it and to study its properties.

“Some of the matter falling towards the [supermassive black] holes is converted into energy. This energy is delivered to the surrounding gas, and leads to large outflows of matter, which stretch for hundreds of thousands of light years from the black holes, reaching far beyond the extent of their host galaxies.”