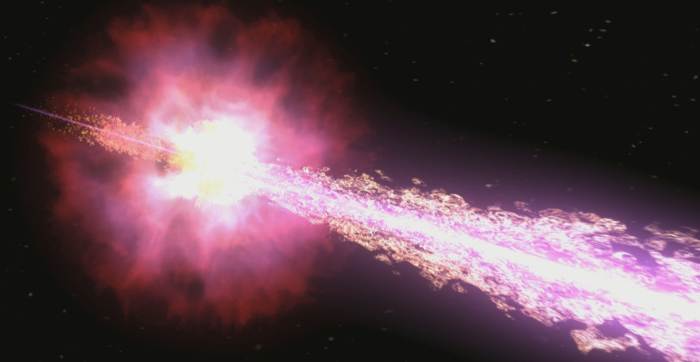 A new frequency estimation of gamma-ray flares in the vicinity of our planet shows that such events occur regularly in the milky Way and can cause massive loss of life in the shortest possible time.

Michael Gouinlock (Michael G. Gowanlock) from the Massachusetts Institute of technology (USA) calculated the probability of impact of a gamma ray burst on the system type of Solar. As it turned out, this part of the Galaxy it is relatively mild. Only 35-60% of all systems have been outbreaks in the last billion years. However, each case for habitable planets may cause the extinction of many terrestrial species. Relevant article sent for publication in The Astrophysical Journal, and its Preprint available on the website of Cornell University.

The gamma-ray burst called a very narrow beam of powerful radiation emitted during a supernova, when a rapidly spinning massive star collapses, becoming a neutron star or black hole (depending on mass).Such bursts — the brightest and most energetic events in the Universe in the electromagnetic range. Although they usually last only seconds, during this time, with a splash is released as much energy as the Sun will spend its glow over 10 billion years of life. The heavenly bodies, especially planets, appeared on the path of such beam, get a huge amount of gamma photons of high energies. Astronomers have long been interested in the question of how likely clash with this event for our planet. 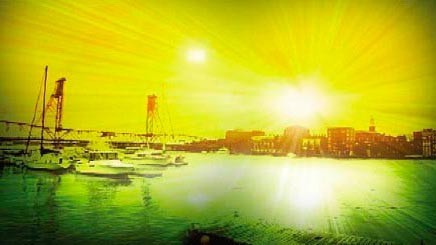 Estimated at the time of gamma flare from the surface of the planet, was on her way.

Gowenlock tried to clarify the answer to this question by creating a model of how our Solar system was moving through the disk of the Galaxy over the past billion years and how often in stellar population which surrounds her, there were such flashes. Their figure was derived from the given observable in the last decade of gamma-ray bursts.

Fortunately, the event is rare, so astronomers far observed it only in other galaxies, that is, the destruction of evil does not give adverse effect to life on earth. Calculations of the researcher showed that the removal of 26 000 light years from the center of the Galaxy the probability to be exposed to a close gamma ray burst for the planet equal to about 35-65% percent over the last billion years. This means that if the Earth faced with this kind of event is relatively rare. Thus, mass extinction in connection with gamma ray bursts are slightly less likely than from a close supernova explosion, which happen more often bursts.

In the case of the Earth the simulation shows that its atmosphere would be enough to absorb gamma radiation from the burst. But in the upper atmosphere it will cause a cascade of chemical reactions that would lead to a considerable mass of nitrogen dioxide. It will destroy the ozone layer, which for many years will increase the amount of ultraviolet radiation reaching the earth’s surface (up to 16 times modern values).

A moderate effect associated with the fact that gamma-ray burst is too short and manages to touch on only half the planet. On the other side of the ozone continues, although then its concentration due to reaction with nitrogen oxides will fall and there. In theory, all this can cause massive cancer in large terrestrial creatures and the death of many smaller ones. In addition, nitrogen compounds form photochemical smog, blocking about 1% of the radiation from the Sun. It somewhat cools the planet and could cause serious cooling on the surface. Visually able will look like a dark veil, constantly holding over a large part of the planet. Also the first time after the burst will be rain with nitric acid, but the precipitation is then normalized.