Gamma-ray bursts can have the property of mirror-time reversal 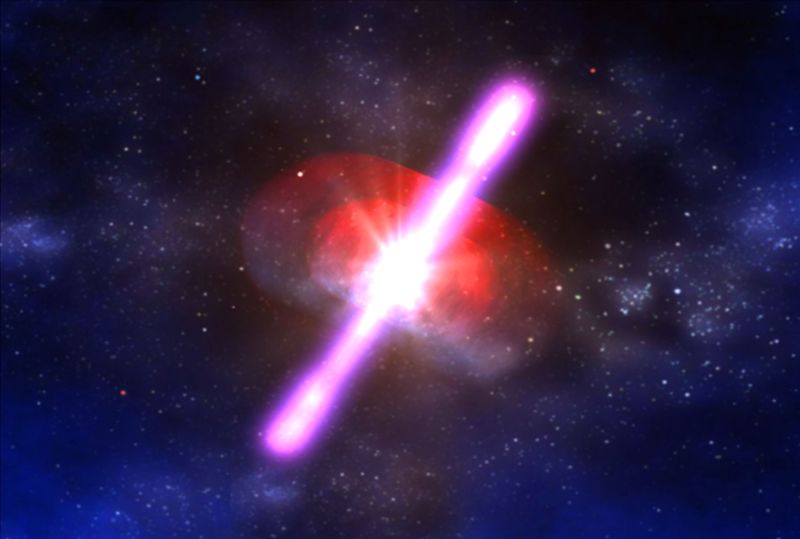 Gamma-ray bursts are the brightest, most powerful and one of the strangest phenomena in the universe. A new discovery will help to study the conditions under which they occur.

The curvatures of the light beams of six gamma-ray bursts showed the presence of complex, wavy, time-reversing structures. In other words, in each pulse there was an event in which time, apparently, was repeating itself. It can tell a new story about the death of massive stars.

It is not entirely clear what exactly produces gamma-ray bursts. The time of their formation can take from milliseconds to several hours, besides they are incredibly bright. Thanks to the discovery of gravitational waves from the collision of neutron stars, it became known that this is one of the phenomena producing gamma-ray bursts.

Astronomers believe that other sources of gamma-ray bursts include the collapse of a rapidly rotating massive star into a neutron star, a quark star (currently a hypothetical object), or a black hole producing a supernova or a hypernova in the process.

They can be registered only if the beam is directed directly at us, most of them occur in billions of light years from the Earth. This requires sensitive equipment and optical equipment for various purposes, since the signal is accompanied by a lot of noise.

This does not mean that bursts are difficult to register. For example, NASA’s Swift satellite, launched in 2004, recorded one thousand bursts before the end of 2015. Noises interfere with the more delicate details of the curvature of light flashes. As scientists found out, low sensitivity of instruments gives a lower signal resolution, “smearing” the structure of the curvature of the light beam of the pulse of the gamma-ray burst.

To minimize this effect, the researchers found six exceptionally bright gamma bursts in the BATSE tool data (Burst and Transient Source Experiment) installed at the Compton gamma observatory. This is how they discovered complex, wavy, time-reversing structures. Moreover, they were present only in the curvatures of the light beam of the brightest gamma-ray bursts.

So, what does this all mean? Probably, the fact that a kind of impactor (a beam of particles like electrons or ions) or a denser wave like a soliton was emitted at a high speed at a high speed. As it moves through the clouds of material previously emitted by the dying star, the impactor produces radiation. If it is partially reflected back through the same clouds, it will produce a similar, but weaker, reverse radiation.

Another explanation may be the presence of some radial two-sided symmetry in the clouds of material – like a series of concentric rings. Then, as you move through them, the impactor follows in one direction, without being reflected. Imagine an object moving toward the target from one side to the other. The center of the target is clouds that are denser than rings. When the impactor passes through this area, it creates a semblance of a “reflected signal” – scientists do not yet know why this is happening. The team is convinced that this study will provide astrophysicists with new methods for understanding the death of stars and the formation of black holes.

“The existence of time-reversing impulse structures led us to the conclusion that physical models of gamma-ray bursts should include strong physical symmetries and interaction with one impactor,” the report says. – We investigated many simple kinematic models and found that either the distribution of impact material in the jet (gamma burst) should have a two-sided symmetry and be affected by one impactor, or a physical phenomenon or one impactor responds to the impact of one impactor creates radiation in a two-sidedly symmetrically distributed material as it passes through it. “