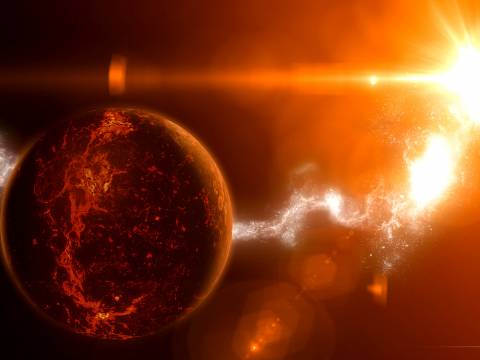 Found the first remains of the primitive earth’s mantle, whose age is more than 4.5 billion years.

The surface of our planet is highly active, it is constantly changing under the influence of geological, climatic and biological processes. Therefore, to detect a substance that belongs to the earliest stages of the Earth’s existence, virtually impossible. Managed it only recently thanks to the work of a group of scientists from Canada and the United States. About the discovery Matthew Jackson (Matthew Jackson), University of California, Santa Barbara and colleagues report in the journal Science.

Like other bodies of the Solar system, the Earth was formed from material of the protoplanetary cloud. The first ten million years of his life, the planet suffered severe bombing the remnants of this substance and other young bodies. The last act of this play – and one of the most important for us was the blow the unidentified body about the size of Mars. Its substance is partially mixed with the substance of the Earth itself, in addition, a large number were in orbit, which eventually formed the moon.

Geologists have long been not very hopeful to find material relating to a very early period, – more than 4.4 billion years ago. It is believed that this substance many times already “melted down” and redistributed by subsequent processes. But little by little scientists are able to open the traces of more and more ancient rocks.

One of the instructions in this dizzying age may be traces of tungsten. In the earthly minerals of tungsten-182 is distributed almost uniformly and in very small quantities: it is shown that it is formed during the radioactive decay of hafnium-182. This isotope of hafnium, in turn, has been found and existed only in the very early Solar system.

In quantities of more than 15 parts per million tungsten-182 is found only in the oldest rocks of the present-day Earth. And such rocks Jackson with colleagues found in two geographically separated areas in Baffin Bay in the North Atlantic and on the plateau Ontong-Java in the West Pacific ocean. According to the geologists, these rocks have changed little from the epoch of the birth of the Earth, and their age is estimated at a dizzying 4.5 billion years.