Geologists told how the huge deposits of clay on Mars 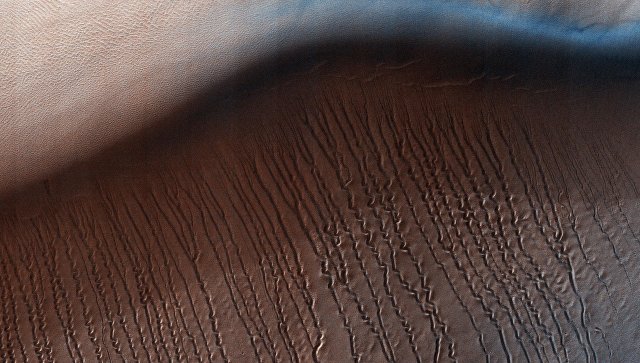 Geologists have found evidence that many deposits of clay on the surface of Mars did not arise from the eruptions of hot geysers, but because of the unusual interaction of the primary atmosphere of the planet and its rocks.

Scientists used images of a satellite of Jupiter, Europe, made by the Galileo probe in 1998. They first managed to examine clay materials on the surface of the satellite – they were brought to Europe by some celestial body (a comet or an asteroid), say the researchers

“One of the main mysteries of the early history of Mars is that we can not explain how such large reserves of clay and other sedimentary rocks that can be seen in the images from probes and rovers have emerged on its surface.Our theory allows us to get rid of all these problems, “said John Mustard of Brown University in Providence, USA.

Subsequently, scientists found many other deposits of clay and other evidence that on Mars was fresh, livable water. As planetologists today consider, the crater of Gail, where the rover is today, is the bottom of a giant parched lake, the deposits from the bottom of which cover the crater and its central part – Mount Sharp.

These discoveries, as well as images from the Mars-Odyssey probes and MROs, indicating the presence of huge deposits of other sedimentary rocks from the phyllosilicate class, led scientists to speculate on how these clay stocks could have developed. Liquid water, if present on Mars, could exist on its surface for a very short time, several hundred million years, and it, as the climate models show, could hardly have produced such large amounts of clay.

Mastaird and his colleagues found a simple explanation for this early mystery of Mars, creating a computer model of the early red planet, when it did not yet have an atmosphere, or reserves of liquid or frozen water.

Scientists drew attention to the fact that its interior, as shown by the analysis of the contents of Martian meteorites, contains large amounts of water and other volatile substances that had to be actively eroded from the rocks at a time when Mars was a red-hot ball of lava.

These evaporation had to form a rather dense and dense primary atmosphere, a kind of “steam bath”, whose interaction with the cooling bark of Mars, as suggested by geologists, could generate large clay reserves in the first 20 million years of the planet’s existence.

They tested this idea, trying to reproduce this process in the laboratory. To do this, scientists created an analogue of the primary atmosphere of Mars, heated it and immersed in it a piece of basalt, similar in its properties to the matter of the red planet. The results of these experiments surpassed all expectations of scientists – in just two weeks they discovered that a significant part of the “Martian” matter turned into a kind of clay.

The success of this experiment, according to the authors of the article, shows that a significant part of the primary Martian crust, about 10% of its total mass, could turn into clays in the first moments of Mars’ existence. Most of these deposits were buried under volcanic eruptions, but even a small part of these “primary clays”, as they are called by scientists, would be enough to explain the stocks of phyllosilicates and other sedimentary rocks that were found by rovers and probes.

“Our idea would be especially interesting to check with the Mars 2020 rover tools.” If NASA decides to put it in a suitable place for us, we can get the samples of clays we need and confirm or disprove our theory, “concludes the scientist .