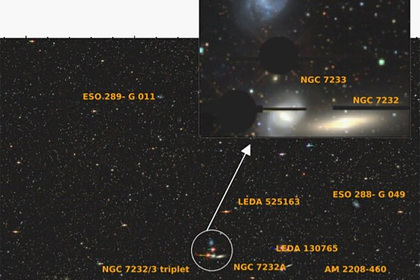 An international team of astronomers has discovered tidal debris in the galactic group NGC 7232. The gigantic structure is composed of cold neutral atomic hydrogen (HI) and extends for about 450 thousand light years. This is reported in an article published on the arXiv.org preprint repository.

Scientists used the MeerKAT radio telescope in South Africa to observe the group NGC 7232, consisting of at least 19 galaxies and located 78 million light years away (in relative proximity to the Milky Way). It turned out that the galaxies in the group actively interact with each other, which is expressed in various structures, for example, tidal tails, bridges and other formations of stars and interstellar matter. They occur when tidal forces deform each galaxy, throwing tails off them, where stars continue to form.

In particular, astronomers have identified extended debris of cold neutral atomic hydrogen around the core of a triplet galaxy known as NGC 7232/3 (composed of three spiral galaxies: NGC 7232, NGC 7232B, and NGC 7233). The streams of matter extend for 20 arc minutes, which corresponds to 456 thousand light years, which is about three times the extent of the region of neutral atomic hydrogen in the three galaxies.

Tidal debris contains HI with a total mass of 4.5 billion solar masses. This is more than half of the total mass of hydrogen found in NGC 7232/3. NGC 7232/3, NGC 7233, and NGC 7232 have lost significant amounts of HI, while NGC 7232B appears to have an excess of gas. However, the scientists noted that, in general, the triplet NGC 7232/3 does not suffer from a deficiency of atomic hydrogen involved in star formation, despite the tidal effects.

it’s NOT mine, I clean up after myself when I go camping in the stars