Giant dust storm on Mars coming to an end 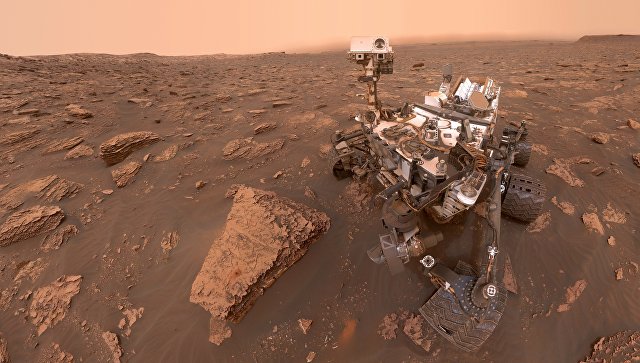 Orbital grouping on the orbit of Mars recorded the first signs that the most powerful dust storm covering the entire surface of the planet is coming to an end. The fate of the rover Opportunity is still in question, reports NASA.

“Starting on Monday, more dust falls on the surface of Mars than flies into its air, which indicates that the storm is coming to an end.” Some of the major features of the relief can already be seen from the orbit, and they, we expect, can be seen and with the help of terrestrial telescopes on the following Tuesday, when Mars and Earth will approach each other, “said Andrew Good, an official spokesman for the NASA Jet Propulsion Laboratory.

In the first days of June, NASA representatives said that a powerful dust storm had begun on Mars, covering most of the Endeavor crater, where the Opportunity rover is operating. A few days after its inception, the situation deteriorated so much that the mission engineers had to switch the rover into a state of emergency and disconnect all its instruments, except for the clock.

In mid-June, as the pictures from the Curiosity rover, which actually works on the opposite side of the planet, showed, the storm swept the whole of Mars and officially reached the planetary scale.

Only this week, as pictures from the cameras and measuring instruments of the MRO probe show, the dust curtain began to gradually settle on the surface of the planet, and in the next few weeks and months the situation on Mars should radically improve.

As Good said, do not expect that the Opportunity rover will wake up in the near future – while the level of illumination of the surface of Mars remains extremely low. In addition, it is not yet clear whether his batteries survived for almost a month of life in total darkness.

According to experts of the agency, such a storm, which arose on the planet about 8 years ago, caused the death of the Spirit rover, the “twin brother” Opportunity, stuck on the slope of the Gusev crater in 2010. In this case, the life of the robot is not threatened – on Mars comes summer, and temperatures on its surface should not fall below minus 40 degrees Celsius, critically dangerous mark for the rover.