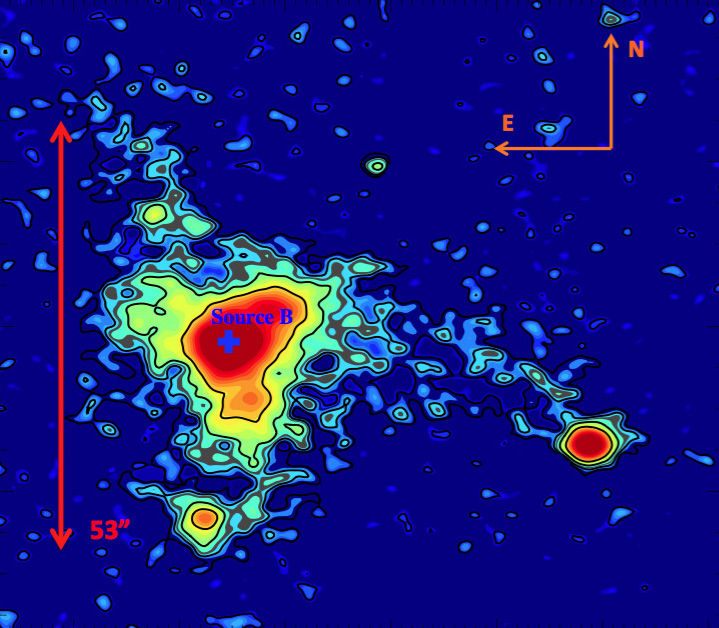 Astronomers have discovered a giant, sparkling ball of gas in a distant part of the Universe, while nearby is not observed any radiation source capable of illuminating the nebula. Called “the giant ly-alpha nebula” (enormous Lyman-alpha nebula, ELAN), this object is the brightest and one of the largest facilities of this rare genus, which as of today there are only a few representatives.

Nebula type ELAN are giant gas clouds surrounding galaxies and extending into intergalactic space. It is believed that they are part of a network of filaments of matter, connected with each other in a giant cosmic web. Open before scientists, objects of type ELAN probably highlighted the powerful radiation of quasars, however, in the case of the newly discovered clouds scientists do not know what causes to glow within it gaseous hydrogen emitting Lyman-alpha radiation (characteristic radiation of atoms of hydrogen).

This rediscovered the nebula lies at a distance of approximately 10 billion light-years away in the center of the region of space with a high density of galaxies. The researchers found this new cluster of young galaxies, called “protocolname”, with a new sky survey, called Mapping the Most Massive Overdensities Through Hydrogen (MAMMOTH).

According to the hypothesis proposed by the authors of the new study, the source of radiation illuminating the nebula, is likely to be active – one of the nearby galaxies (the giant black hole at the center of the galaxy, actively absorbing matter), which is hidden from observation by a thick layer of dust.